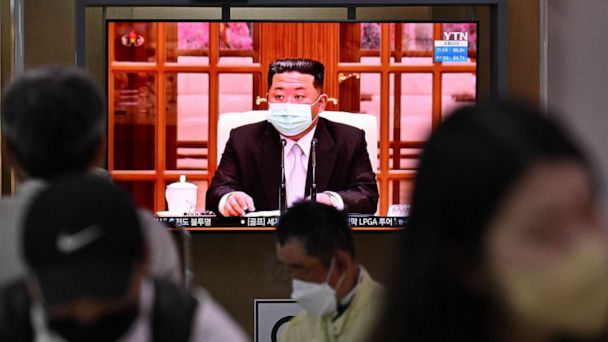 As North Korea rattles its foreign rivals by escalating shows of firepower, the coronavirus could be attacking the Hermit Kingdom from within.

In a rare admission this week, North Korean state media announced its first COVID-19 cases, including six deaths from the virus and an additional 350,000 infections since April (although experts say those figures are likely much higher.)


After insisting for more than two years that the country was untouched by the global pandemic, its leader Kim Jong Un locked down all cities and counties as part of a "maximum emergency" response, and was spotted wearing a mask for the first time.

Despite the outbreak, North Korea test launched three short-range ballistic missiles this week-evidence of Pyongyang's commitment to expanding its military arsenal and hardening stance against the West.

While the country has ramped up its nuclear weapons program, its health care system remains under-resourced and ill-equipped to handle an influx of patients. According to the World Health Organization, it's one of only two countries that has yet to start a COVID-19 vaccine campaign.

Pyongyang has declined assistance even from its close allies, like China, so offers to share vaccines from its sworn enemies are all but certain to prove futile.

The State Department confirmed the U.S. has no plans to give doses to North Korea, but a spokesperson told ABC News "we strongly support and encourage the efforts of U.S. and international aid and health organizations in seeking to prevent and contain the spread of COVID-19."

The spokesperson added that should COVAX -- a global initiative to which the U.S. has pledged to donate over 1 billion doses by the end of next year -- decide to allocate vaccines to North Korea, the department would support the decision.


However, Pyongyang has yet to accept a single shot from COVAX.

"We urge the DPRK (North Korea) to work with the international community to facilitate the rapid vaccination of its population," the spokesperson added.

In addition to vaccines, North Korea is believed to lack adequate testing capabilities and anti-viral treatments to treat COVID-19. Its isolation also means it's likely that very few of its citizens have been previously infected and recovered, giving them some level of immunity.

The capital city hosted a massive military parade late last month that could have contributed to the virus spreading.

President Joe Biden is slated to travel to South Korea and Japan next week, his first trip to the region since entering office. Both North Korea's nuclear provocations and the added instability the coronavirus might bring to country are likely to be top items on the agenda.