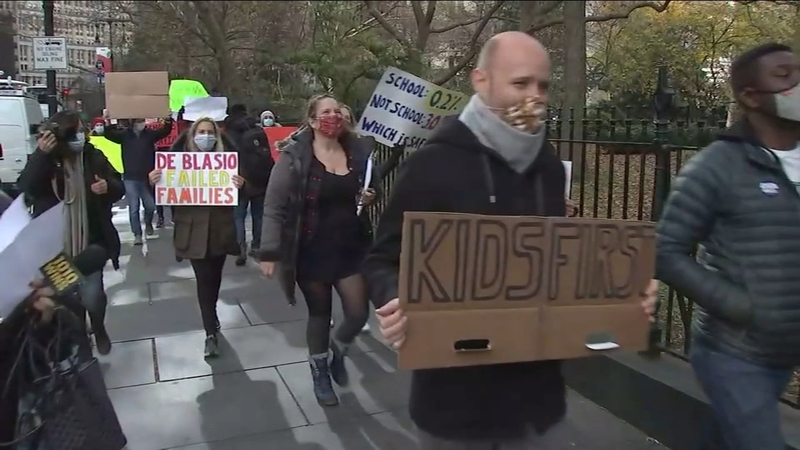 NYC schools closure could be 1st domino in reopening rollback

NEW YORK CITY (WABC) -- Many parents are frustrated after New York City officials announced the largest school district in the nation would be closed through at least Thanksgiving.

The city's rolling 7-day coronavirus positivity rate crossed the 3% threshold, prompting the move to close school buildings and switch to remote learning. Schools Chancellor Richard Carranza said it was not a happy day for the Department of Education.

Stacey Sager has more on the reaction to the closing of New York City schools.

They agree with him on one thing, that schools are safe. That's why they want them back open.

That's why Jampel helped lead this group of New York City parents down Park Row to the gates of City Hall.

"We represent more than 12,000 New York City parents who are demanding that schools open now," she said. "Our message right now is we need to open schools now. Like, they should never have been closed. This 3% metric is arbitrary. It's anti-science."

The city's own testing data backs her up. Out of more than 140,000 COVID tests among teachers and students since mid-October, just 308 have come back positive.

Eight-year-old Oliver Sailing is ready to get back to class at PS 144 in Queens.

"I can see my friends, play with my friends, and learn and do a lot of other stuff," he said.

But it's not just parents, politicians are piling on too. Including Public Advocate Jumaani Williams and City Council Education Chair Mark Treyger, speaking Thursday morning on Zoom.

"So, for a mayor who ran on a platform of ending the tale of two cities, that tale is fully wide open right now. That that two cities, two cities are in full-blown mode right now in New York," Treyger said.

"We shouldn't have people eating indoors and going to non-essentials, while students are not able to learn properly that just didn't make any sense," Williams said.

The parents who rallied at City Hall then left on the way to Governor Cuomo's office in Midtown to deliver the same message to him.

The Family Homelessness Coalition released a statement urging NYC not to forget about the 114,000 homeless children at high risk of falling behind.

"For the 114,000 homeless children in New York City, school closures aren't just frustrating -- they are a danger to their well-being. For a child living in a shelter, temporary housing, or doubled up, remote learning is hardly an option. Many lack basic necessities like Wi-Fi access, a working tablet or even physical space to study and learn. New York City cannot stand idly by as our most vulnerable children fall even further behind, spiraling deeper into a cycle of poverty. City officials must act expeditiously to give homeless children a fighting chance at making it through the school year. Now is the time to set up hotspots at the community level in close proximity to all family shelters, increase access to Learning Labs, and expand education resources for children struggling to learn in temporary housing. Every child has a fundamental right to an education. Our city's homeless and housing insecure children are no exception."

Gov. Andrew Cuomo is offering some personal advice for all New Yorkers on Thanksgiving: Don't be a turkey.