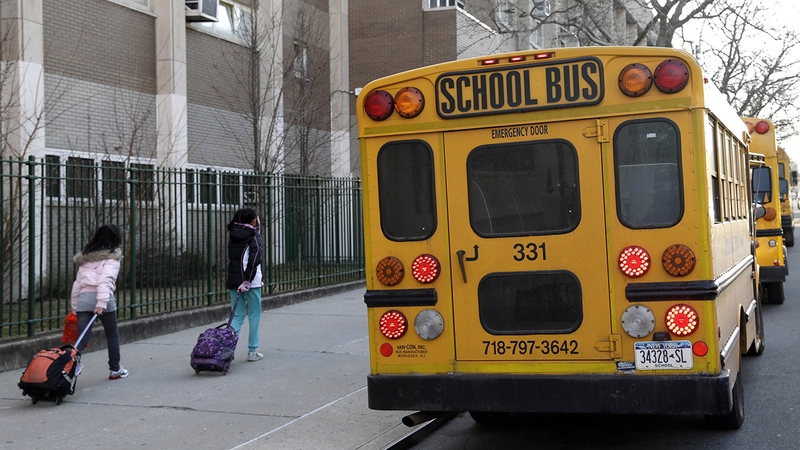 NEW YORK (WABC) -- New York City Council approved a measure Wednesday to install GPS systems on school buses that will allow parents to use an app for tracking their children.

This comes after the sudden snowstorm in November left buses stranded in traffic for hours, and parents couldn't reach their kids.

"It has a cascading effect, especially for children with special needs," said Corey Johnson, Speaker of the NYC Council.

The legislation was named STOP, which stands for the Student Transportation Oversight Package. Along with the installation of two-way radio devices and GPS systems on school buses, the city will now be mandated to report bus times, delays and complaints.

All 10,000 city school buses are now required to install these systems by September. As of now, 6,000 are already equipped with this technology.

This new package of bills stems from complaints about the city's beleaguered school bus system, which include horror stories about kids stuck on buses for hours or dropped off at incorrect locations.

"It's pretty straightforward. We can do it for Uber. We can do it on MTA buses. We can do it even on subways, and listen, if the MTA can get this right, it's scary that the city hasn't been able to get it right with our yellow buses," said Ben Kallos, a Democratic City Council member.

The portion of legislation involving the GPS will cost about $3.6 million in the first year of implementation. There's an estimated $1.8 million cost in the years to follow.

Eliyanna Kaiser, a New York City mother, said she is ready to celebrate over this new legislative package.

"(The buses) were arriving at least an hour late almost every day for the first month of school," she said.