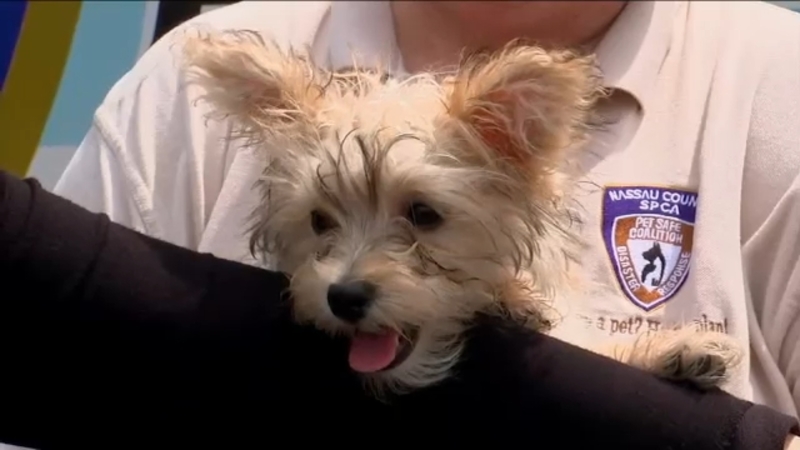 Nassau Police said Puppy 4 You Inc. in Baldwin sold diseased puppies. They identified the owner of the business as Pecardy Delone, of Baldwin.

Police said 10 of the 11 puppies authorities seized from the location in March had parasites, and one of the puppies later died.

Investigators said Puppy 4 You did not follow proper vaccination and deworming protocols for the animals, did not provide them with adequate ventilation and did not regularly clean their cages.

Delone is being charged with selling and offering to sell a diseased animal.

"Can you imagine the outcry if this was children?" said Gary Rogers, with the Nassau County SPCA.

Eyewitness News responded to the store on Merrick Road on March 15 after receiving phone calls from people who had bought puppies from Puppy 4 You only to have them die weeks later. They were left with thousands of dollars in veterinarian bills.

When Eyewitness News arrived, the store was locked and appeared to be vacant. There was no sign on the store, and the windows were covered in paper.

Dogs, however, could be heard barking inside. Eyewitness News notified law enforcement and, hours later, we filmed the dogs being seized from the store.

Eyewitness News later found that Puppy 4 You was not licensed in Nassau County or with New York State.

Attorney Bob Schalk, who is representing Puppy 4 You, said Delone only owned the business front and had nothing to do with the dogs inside. Schalk said Delone allowed the owners of the animals to house their dogs in the building.

"None of the dogs in that storefront were owned by Mr. Delone," Schalk said. "If other individuals are trying to capitalize on the dog breeding business and did it the wrong way, that's not Mr. Delone's fault."

Schalk said Delone has been selling dogs for years.

"He has a tremendous list of clients who support him and he's very good at his job," he said.

Schalk said Delone was in Florida when investigators showed up in March.

On Tuesday, reporters got to see the puppies that were seized. At least a few dogs were imported from Poland, according to Rogers.

Four of them are medically cleared for adoption.

If you're interested in adopting them, call the Nassau County SPCA at 516-THE-SPCA.

The Nassau SPCA spent $54,000 on veterinary bills to nurse the puppies back to health. If you would like to donate to cover some of the costs, visit puppies.ncspca.us.

"Yes, the animals look cute," she said. "However, they are damaged. We need to stop the puppy mill to pet store pipeline by New York not becoming and not staying a destination to dump damaged animals born in cruel and brutal puppy mills."

The bill didn't pass this legislative session, which Rosenthal blames on lobbyists and vows to counteract before next session.