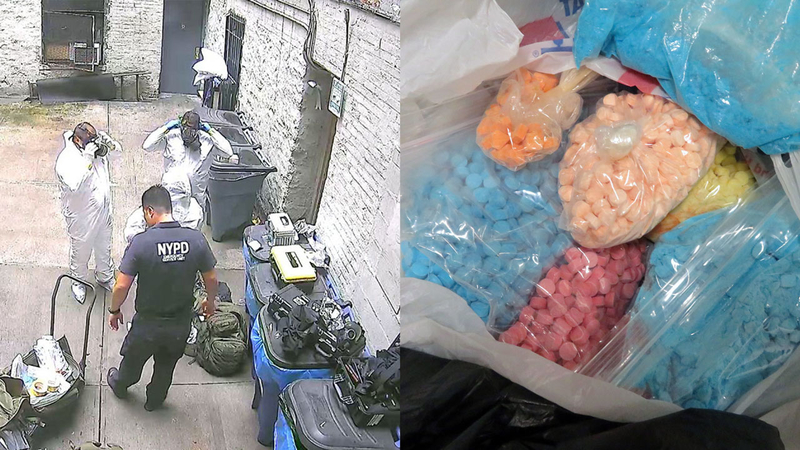 The Bronx, NEW YORK (WABC) -- Three people, including a Bronx building's superintendent, were arrested and charged in connection with an alleged conspiracy to produce and distribute black market pills containing heroin, fentanyl and meth, officials said.

Castillo, a superintendent of a five-story residential building in Fordham Heights, allegedly used a vacant apartment and boiler room in his building to package and manufacture pills, while Chavez and Hernandez-Ozoria allegedly sold the drugs as members of a large-scale black market pill distribution ring.

According to police, Chavez and Hernandez-Ozoria met with an undercover officer near 201st Street and Grand Concourse in the Bronx on July 31 and sold the officer two bags of pills for $5,000. They allegedly claimed one bag of 860 pills contained oxycodone and the other bag of 50 pills contained ecstasy, or MDMA.

Lab tests, however, determined that the purported oxycodone pills were counterfeit and contained a dangerous mixture of heroin and fentanyl, while the 50 purported ecstasy pills contained pure methamphetamine.

During a second sting on September 11, police arrested Chavez and Hernandez-Ozoria and seized approximately 3,000 purported oxycodone pills with similar appearances to the pills purchased on July 31. Results of DEA laboratory analysis are pending.

After the arrests, police said they were granted permission to search the boiler room and vacant apartment in Castillo's Fordham Heights building and found a pill press machine inside the boiler room. Castillo, who lives in another apartment in the same building, was arrested.

"Narcotics traffickers have long exploited the nation's high demand for pain pills, a powerful gateway to addiction," Special Narcotics Prosecutor Bridget Brennan said in a statement. "But this investigation reveals an even more deviant scheme -- an organization creating and distributing counterfeit pills with highly potent and lethal compounds, manufactured in an apartment right next to the boiler room."