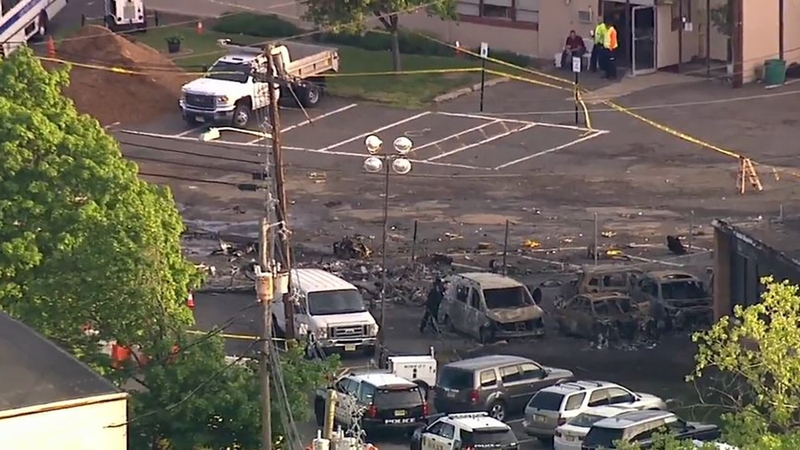 CARLSTADT, New Jersey (WABC) -- Federal investigators say the cockpit voice recorder has been recovered from a jet that crashed near a small airport in New Jersey, killing two crew members.

Jim Silliman with the National Transportation Safety Board said Tuesday afternoon that the voice recorder had been recovered and was being shipped to NTSB headquarters. He says the flight wasn't required to have a data recorder.

Silliman says controllers would have tried to have the plane head into the wind to avoid crosswind.

"The right wing down and nose down. From what we can see from the small portion of video we have seen, it would seem that the aircraft was at that moment, out of control," Silliman said. "That would not be something a pilot would be doing. That would indicate the aircraft at the very last moment was out of control. How it got there is the subject of the investigation."

The crew members were killed when the Learjet 35 crashed among small warehouses and industrial buildings Monday around 3:30 p.m. in Carlstadt and burst into flames, a quarter-mile from the runway at Teterboro Airport. There were no passengers aboard and no one on the ground was reported injured.

The Medical Examiner is working to determine the identity of the victims. The FAA and the NTSB were at the scene on Tuesday.

There was no indication in radio communications with the tower that there was anything wrong before the plane dove into the area and burst into flames.

In the final moments, witnesses saw the plane low in the air and in trouble.

Surveillance video from a nearby business shows the moment of impact and then a huge fireball. A man can be seen running across a parking lot toward the crash site as thick, black smoke spews into the air.

"It hit three buildings. There are just pieces of the plane all throughout the yard, melted cars that were parked here," said Joe Orlando, spokesman for the borough of Carlstadt. "It's really almost impossible to describe."

Two of the three buildings involved in the crash sustained fire damage.

Emergency responders worked for more than an hour to extinguish the blaze, which left a smoldering wreckage of cars in a parking lot. Investigators said 16 vehicles also were damaged.

It happened in an industrial area where public works employees had just left. Others in the area ran for their lives.

The plane was registered in Billings, Montana, to a company called A&C Big Sky Aviation, which has a residential address. The owners of the residence are Daniel and Julane Wells. The owners rented the plane out for charters.

The airport was closed after the crash. Departing flights resumed in the evening, but no arriving flights were allowed.

The jet had flown from Teterboro to Bedford, Mass., early Monday morning. It then flew to Philadelphia later Monday morning before leaving for Teterboro in the afternoon. It was just about to land at Teterboro before the crash.
EMBED More News Videos

Anthony Johnson reports on the concerns of residents who live near Teterboro Airport.