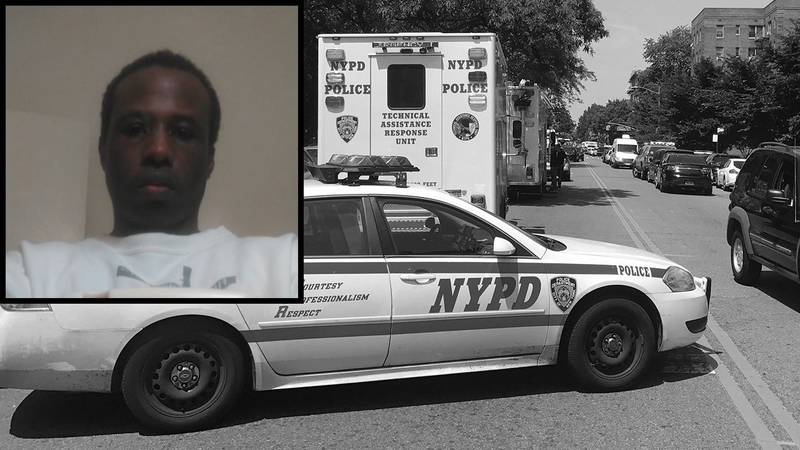 FLATBUSH, Brooklyn (WABC) -- Police shot and killed an emotionally disturbed man after using a Taser on him in Brooklyn Monday, NYPD officials said.

The incident happened on New York Avenue near Foster Avenue in Flatbush just after noon.

The distraught family of Dwayne Jeune left the neighborhood church where they'd been processing their inexplicable loss.

A man they describe as a gentle giant was shot and killed by police after allegedly charging at them with a massive carving knife.

"I know he had a little mental problem, but to be violent and all that I don't know," said Devon Luke, Jeune's cousin. "Every time you see him always, 'good morning, good afternoon,' that's the Dwayne I know."

But police say that wasn't the Dwayne they encountered on a routine call Monday at the East Flatbush apartment where he lived with his parents.

His mom had called 911, saying he was emotionally disturbed, but nonviolent and unarmed. When four cops arrived from the 67th precinct, his mother let them in.

"This incident unraveled within seconds of the officers arriving in the apartment," NYPD Chief of Patrol Terence Monahan said.

A senior law enforcement official tells Eyewitness News, the cops encountered Jeune outside the back bedroom, swinging that knife. They immediately retreated, as one fired a Taser, but it didn't work.

That officer, then tripped and fell. Sources say Jeune was now standing over the officer with the knife. That's when a second cop opened fire.

"I was in my room making up my bed and I heard three, four, gunshots and I said, 'What the heck is that?'" Charmaine Goodin, a neighbor.

Jeune was pronounced dead at the scene.

Police are trying to figure out why the Taser didn't stop the man the way it's designed to.

It turns out the officer who fired the shots also shot and wounded a different emotionally disturbed person this past October, but was cleared of wrongdoing.

The man he shot is now on trial for assaulting a cop.

In Monday's incident, one of the bullets pierced the wall of the apartment next door where 14-year-old Lasaunti Newell was fast asleep.

"It flew through the dining room, right over the table," Lasaunti said. "The walls are pretty thin so I guess that's why it was able to fly through."

"It's really devastating to me, knowing what could have happened to her," Lasaunti's mother said.