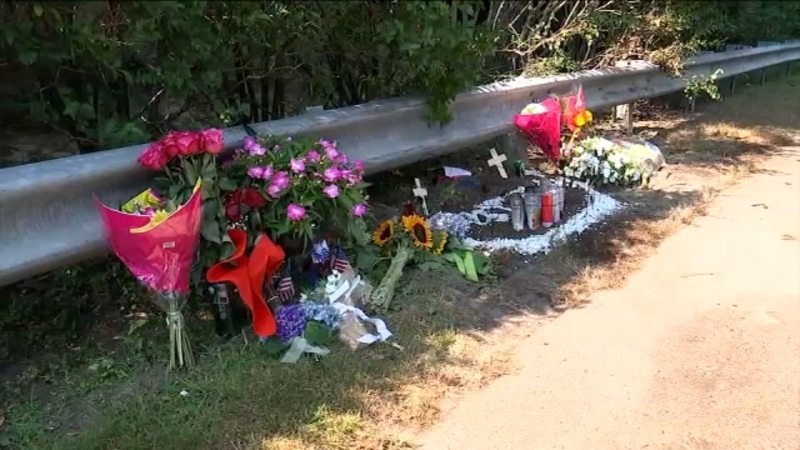 QUOGUE, Long Island (WABC) -- Authorities are releasing more information about the horrific crash on Montauk Highway on Long Island that left five people dead, as family, friends and an entire community continue to mourn the victims.

It happened just before midnight Saturday in Quogue, where authorities say 22-year-old Justin Mendez was speeding when he veered into oncoming traffic and slammed into a Toyota Prius operated by an Uber driver with four passengers.

John Del Giorno reports over the scene of the spilled vegetables on the Brooklyn Queens Expressway.

"We are grieving with them," Quogue Mayor Peter Sartorius said.

Village Police Chief Christopher Isola said a Quogue officer traveling eastbound saw Mendez speeding in the westbound lanes and turned around to pull him over, but the officer didn't catch up before the crash.
EMBED More News Videos

The officer did turn on the cruiser's lights, but at that point, he couldn't see Mendez's car.

"We have evidence that can demonstrate there was a very brief view of the vehicle," Isola said. "But the officer very quickly loses sight and never catches up to him."

An autopsy and toxicology report are pending, and investigators are also looking into whether Mendez was texting.

Some marijuana was reportedly found in the glove compartment, though officials did not say how much.

Maglio remains at South Shore University Hospital, and investigators have spoken with her family.

A witness told police Mendez turned off his headlights, and radar and officer visual placed his vehicle at roughly 55 miles per hour. The speed limit is 30.

The NTSB is involved in the investigation, as is the New York Attorney General's Office.

"We will exhaust every means to find out how this happened," Isola said.

Melissa Barrett has lived in Quogue for seven years and said, sadly, she is not surprised the accident happened at the location.

"We know just folklore that, you know, being in this village that this is a dangerous turn," Barrett said.

Eyewitness News spoke with several Quogue residents, including Barrett, who said they are prepared to fight to make sure safety improvements are made at the intersection.

Barrett said on Saturday night, she had just returned from picking up her teenage child from a house near the accident site when police stopped her car and started yelling at her to go away.

"I saw about five policemen run out of an SUV and with flashlights into the woods," she said.

Barrett said her 17-year-old stepdaughter rode her bicycle home along the curve just five minutes before the accident.

Barrett provided pictures to Eyewitness News from a month ago which show how a woman flipped her car at the same curve, going in the same direction as Mendez.

Isola said two people died at the intersection in 1997.

A spokesperson for the Suffolk County Department of Public Works said county traffic experts will be looking into the safety of the roadway.

"The Suffolk County Department of Public Works has begun the process of initiating a traffic safety study on this portion of CR-80 in Quogue," the statement read.

On Monday, officials in Quogue Village put a flashing speed sign just before the curve heading westbound - the direction Mendez was traveling. It registers the driver's speed, flashes it onto the sign and warns the driver if they are going too fast.

Isola said he does not consider the intersection a problem area.

"That road is consistent with many other roads like it," he said.

According to police, Mendez was wearing his seatbelt at the time of the crash, as were Zahid and Michael Farrell, who was sitting in the front passenger seat of Zahid's car.

Police could not confirm if the rear passengers in Zahid's car -- James Farrell, Kiess and Maglio -- were wearing seatbelts or not.