NEW BRUNSWICK, New Jersey (WABC) -- Two people have died and seven others were injured during a shooting at an off-campus party near Rutgers University early Sunday morning.

The shooting happened at a birthday party on Delafield Street in New Brunswick, New Jersey.

Police say someone started shouting and interrupted the off-campus party.

Authorities are looking for four gunmen who opened fire and struck individuals who were present.

28-year-old Lionel Macauley, of Somerset, and 23-year-old Anthony Robinson, of New Brunswick, were pronounced dead at an area hospital.

Four victims remain hospitalized, three in stable condition and one in serious/critical condition.

The injured were transported to an area hospital where two male victims were pronounced dead -- including the person celebrating his birthday. Lionel Macauley, 28, of Somerset, and Anthony Robinson 23, of New Brunswick,

Surveillance video captured the violence as a car pulled up and the four suspects jumped out with their guns drawn.
EMBED More News Videos

Two people have died and six others are injured after a shooting at an off-campus party near Rutgers University early Sunday morning.

Some in the area ducked for cover while others ran for their lives.

It took just a few seconds, and when the bullets stopped flying, several dozen shell casings were left on the street.

Thus far, the investigation has determined that there is no affiliation with Rutgers University or its students.

While many students do live on the same street, no students were hurt or involved.

"I ran up to one young man and I'm saying 'I'm here man,' and he's gargling blood, so I flipped him over so he wont choke or suffocate, checked for a pulse," witness and Rutgers junior Jacob Beacher said.

Witnesses told Eyewitness News that there was another problem before the shooting, a fight happened at the very same house.

The New Brunswick Police Department is actively investigating this incident and asks that anyone with information, or who may have been in the area at the time, contact the NBPD's Detective Bureau at 732-745-5217. 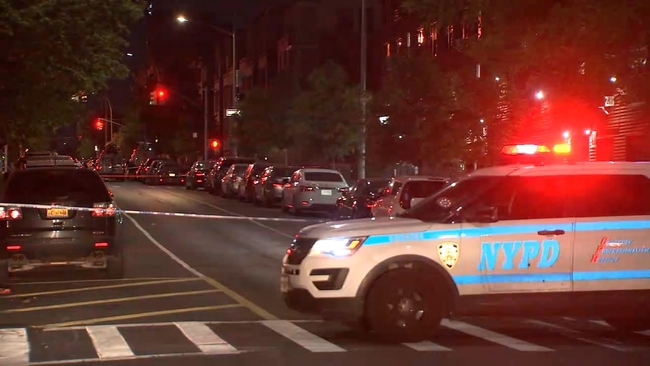