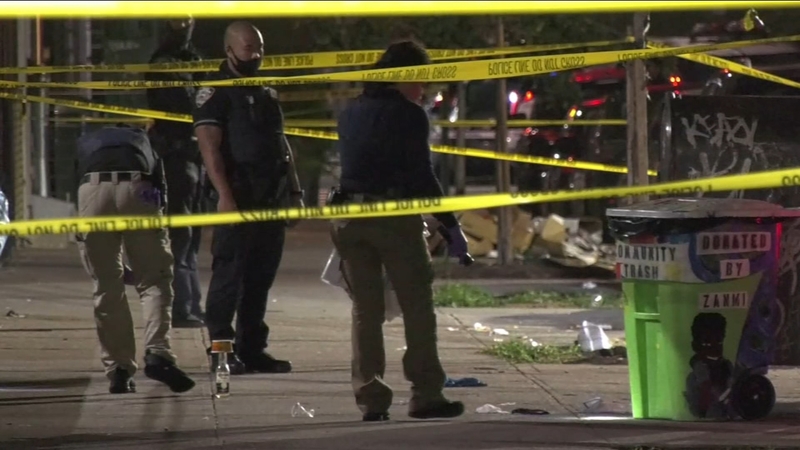 The suspects all fired from a white BMW Series 5 into a crowd on Hawthorne Street just after 10:15 p.m.

Shots were fired out the driver's window, the passenger's window and the sunroof. Six people were struck.

A 23-year old-man was shot in the chest and killed.

Police say at least four people were wounded in a shooting in Brooklyn Wednesday night.

Four other men and a woman were also hit.

The shooting appears to be gang-related. It was unclear who in the crowd, if any, was targeted.

A 19-year-old was taken to the hospital after being shot in the chest in East Flatbush.

"It looks like we're living in Afghanistan," said Serilla White, a resident.

She said she's lived in the area for 10 years, and scenes like this are becoming too familiar.

"All the time. The first week I came here, I heard gunshots," she said. "10 years, nothing has changed?" asked Eyewitness News.

"Nope, and it looks like it's getting worse," White said.

Officials remained on the scene collecting shell casings. The shooting was likely gang related, according to officials.

"I saw somebody injured. He was like on the floor, on the ground right there and a guy was balling his eyes out. I mean, it was horrific," another witness said.

Thursday morning, families had to duck under crime scene tape to get to work and school.

The block of Hawthorne between Nostrand and Rogers has seen new apartments and restaurants pop up in recent years, but that hasn't stopped the gang violence at night.

"Once the sun goes down, it's back to what it is," said Joe Codd, a neighbor. "Six people got shot. What does that tell you?"

It was one of three fatal shootings in two hours in New York City Wednesday night.

At 9:36 p.m. in Brooklyn, a gunman fired a half dozen times at a 28-year-old man in front of an apartment building on Herkimer Street in Bedford-Stuyvesant, killing him.