Derick Waller reports on the video, which shows the driver and passenger of a passing black SUV opening fire on the victims.

WILLIAMSBRIDGE, Bronx (WABC) -- New surveillance videos of four people being wounded in a drive-by shooting and a fruit vendor being shot with a BB gun are highlighting a sharp increase in gun crimes in the Bronx.

One video shows someone in a passing black SUV almost fully out the window, opening fire on the victims Wednesday.

An 18-year-old carrying an airsoft BB pistol was shot in the head and was the most seriously injured by the gunfire, which erupted at 5:05 p.m. on Burke Avenue.

The man was taken to the hospital in critical condition, and detectives are optimistic he will survive.

One of the victim's relatives spoke to Eyewitness News.

"I came to see my sister, they say she went to the hospital," she said. "I don't know nothing. I don't know what's going on. I don't know if he died, if he's alive, or nothing."

Police believe the victim may have been the intended target, and three others were also wounded.

A 15-year-old boy was shot in the left buttock, a 59-year-old woman was hit in the left thigh, and a 26-year-old man was struck in the thigh and ribcage.

All of them are expected to survive, and some are believed to be innocent bystanders.

The 26-year-old victim works as a porter at Help USA, a homeless outreach agency building located on the block where the shooting happened.

The incident is part of a larger rise in gun violence in the Bronx, with both real guns and BB guns.

Then, on Monday, November 8, someone fired a BB gun on the southbound No. 2 train platform on East 219th Street, injuring subway conductor Trevor Thomas.

Thomas, a 9-year veteran of the MTA, was observing the platform when he heard a pop and felt a stinging pain in his nose shortly after 9 p.m.

"I'm about to close the doors, and as soon as I turn my head left, they just shot me," he said.

The shooter, described as a teenager wearing black clothing, ran from the station. Police believe the two BB gun shootings are connected.

Thomas, who was treated and released at the hospital, was assisted by union officers. He must see a specialist to get the pellet removed from his nose, he said. 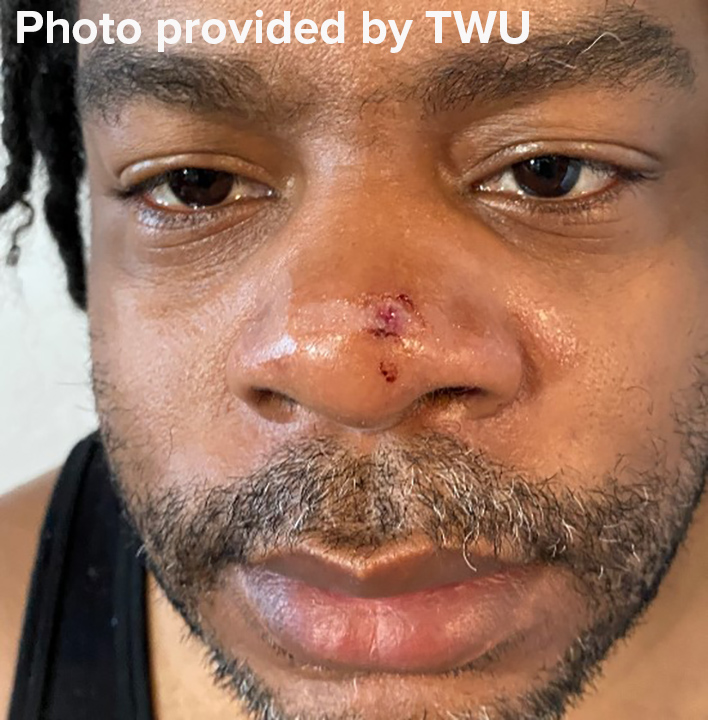 "I was scared for my life," Thomas said. "I've been assaulted a few time this year, but this is the worst one."

"This is a heinous attack on a transit worker which underscores the need for greater protections and stronger laws to keep our members safe," Rapid Transit Operations Vice President Eric Loegel said. "We're all very lucky this conductor is doing OK, but it easily could have been worse. The union demands the assailant be brought to justice."

Police are looking for the young men seen in the surveillance images.

Bronx District Attorney Darcel Clark says a major issue surrounding all of these cases is the fact that teenagers caught with guns are now charged in Family Court and are usually released very quickly.

WATCH | Train conductor speaks out after being hit in face by BB gun: