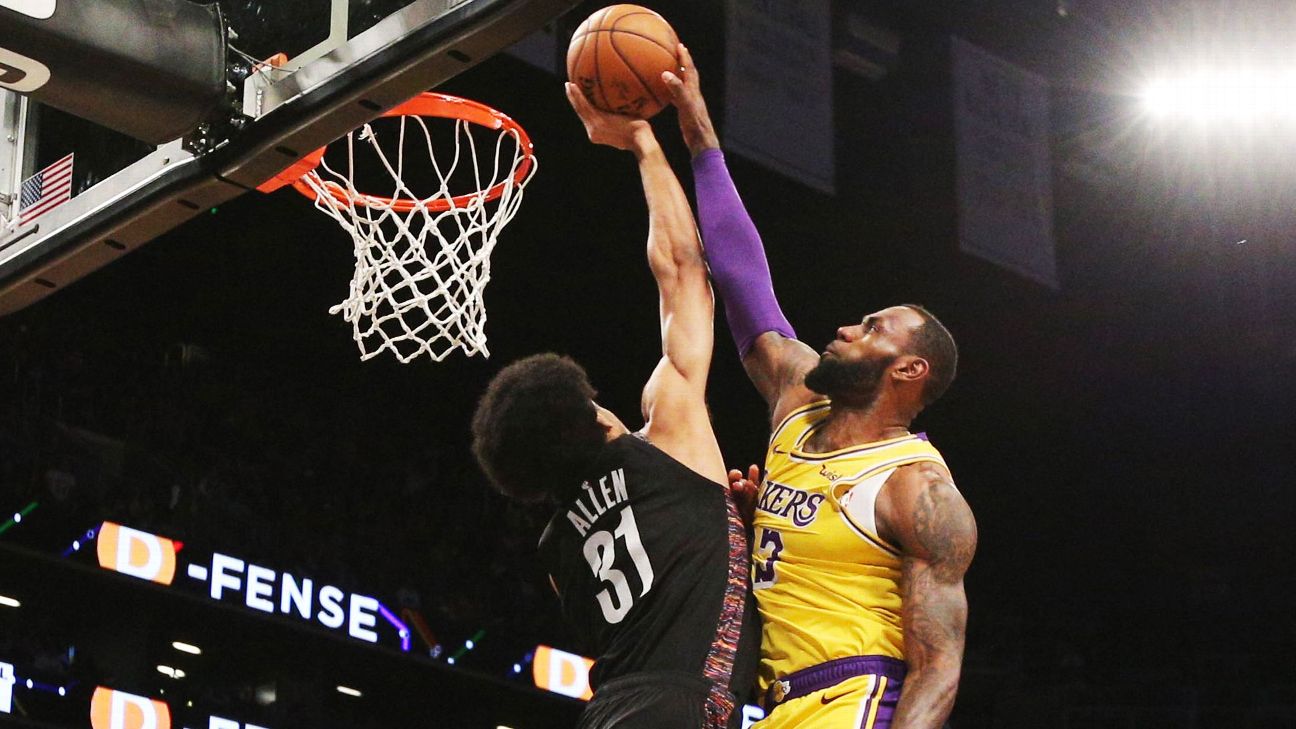 wants to wind down after a game, he usually slips out of Barclays Center and makes the 30-minute walk to his Brooklyn home.

But with his 6-foot-11 frame and signature Afro, the Brooklyn Nets' second-year center is easy to identify. So what Allen calls his "me time" is sometimes interrupted by patrons in bars and restaurants along the route.

"You can hear them yelling, 'Oh, that's Jarrett Allen!'" he says with a grin. "But you just keep walking and ignore it."

This season, one viral moment made it clear that his "me time" during those walks home from the arena would be harder and harder to come by.

"When I blocked LeBron," Allen says, "that's when [everything] blew up."

Allen's defense at the rim this season -- against LeBron James, Giannis Antetokounmpo, James Harden and anyone else who has challenged him -- is one of many reasons why people around the NBA are taking notice of Brooklyn's resurgence.

After averaging 23 wins over the past three years, the Nets -- led by Allen, young guards D'Angelo Russell, Caris LeVert, Spencer Dinwiddie and a strong supporting cast -- enter Wednesday's game against the Oklahoma City Thunder in sixth place in the Eastern Conference standings.

Maybe Allen adds to his list of rejected All-Stars with a block of Russell Westbrook or Paul George. Or maybe he gets dunked on. He's OK with either; Allen isn't afraid of ending up on YouTube for a block attempt gone wrong.

for Rondae Hollis-Jefferson to do is pray.

LeBron had just gone to his left to beat the Nets forward off the dribble, ready to elevate and throw down his signature right-handed slam for his first points of the night.

Hollis-Jefferson knows Nets head coach Kenny Atkinson won't be happy if the Los Angeles Lakers superstar finishes the play with an easy dunk less than two minutes into the first quarter. So Hollis-Jefferson turns around, hoping to see his center somewhere near the rim as James switches hands and gathers himself 4 feet from the basket.

Allen, positioned in the paint, reads James' body language and knows that he's looking to finish with a highlight.

"You can tell when any player is gathering to go and dunk it. ... You can see [LeBron] brings it back a little bit when he goes up," Allen says.

So the 20-year-old slides to his right, loads up and meets James at the rim, bracing for impact with the 260-pound forward. "People don't know how powerful his dunks are," Allen says.

They don't find out on that December night in Brooklyn, as Allen rises roughly a foot above the rim to reject the king.

The ball careens off the backboard and Allen ends up on the ground, not immediately realizing the impact of the moment about to take over social media.

"But then you hear the crowd's reaction," Allen says. "And then what really gets you is you hear them start yelling again when they show the replay."

Hours later, Allen finds out that he had become just the eighth player to block the four-time MVP, who has more than 1,800 dunk attempts in his career.

"Growing up ... everyone would say, 'Are you going to jump when LeBron's coming at you?' I was like 13 years old [at the time]. That's the opportunity right there."

This season, Allen has had plenty of opportunities to meet some of the NBA's biggest stars at the rim:


"For people to keep going down there and trying him, I think that's what they're supposed to do," Russell says. "But the percentages aren't that successful."

Allen has blocked 15 dunks this season, two behind JaVale McGee's league-leading total. Allen ranks 12th in blocks per game and is among the game's top rim defenders, holding opponents to a shooting percentage that is in the 75th percentile of players who defend at least three shots at the rim per game.

the name Frederic Weis, but he has seen the footage of Vince Carter's iconic dunk from the 2000 Olympics in Sydney. The way Allen sees it, the risk of ending up on the wrong end of a viral highlight is the cost of being a shot-blocker in the NBA.

"Nobody likes getting dunked on," Allen says, but what separates him as a rim protector, teammates and coaches say, is his lack of concern over the public scorn that comes with being on the wrong end of a dunk.

"People call it a business decision. I don't think about that," Allen says. "I know my role on the team is to be a rim protector. So I'm going to sacrifice for the team."

The Nets value that approach.

"There's no bravado," Atkinson says of Allen. "He's not Dikembe [Mutombo, wagging his finger]. His personality is such that he doesn't take [getting dunked on] personally and he goes back at it again."

Adds Davis: "That's half the battle. A lot of guys don't want to be embarrassed. But if you're a shot-blocker, that's what comes with it. Sometimes you're going to be on SportsCenter. But when you have that 'I don't give a f---' attitude, most of the time you come out on the better end."

Selected 22nd overall in 2017 with the pick the Nets acquired via trade from the Washington Wizards, Allen has come out on the better end of many highlights at the rim this season. But he also has shown that he's more than just a shot-blocker.

In addition to his blocks per game (1.5), Allen has increased his scoring (11.2 PPG) and rebounding (8.5 RPG) in his second season, flashing an ability to finish with both hands -- and through contact -- around the basket. And Atkinson believes, in time, Allen can be a true threat from the perimeter.

"You're going to see in two, three years he's Al Horford-ish," says Atkinson, who worked with Horford during his time with the Atlanta Hawks.

Davis sees similar potential, which is why he believes Allen could one day be one of the highest-paid players at his position.

"I think he's a $100 million player," Davis says. "I don't just throw that out there and say that about anybody. He's got all the tools, he's got the work ethic. Everything is going to fall in place."

It's not hard to see a nine-figure contract in Allen's future. Clint Capela, Rudy Gobert, Steven Adams -- players of a similar profile -- have all inked sizeable extensions in recent seasons.

"He can certainly be in that class of big men," one Eastern Conference executive says.

And if that comes to fruition -- and Allen becomes the backbone of a contender in Brooklyn -- some talent evaluators may have to explain their pre-draft analysis of the center to their bosses. Before the 2017 draft, some teams questioned the Austin, Texas, native's dedication to the game. "That not loving basketball [label] is B.S.," Atkinson says.

Allen believes it was due, in part, to his off-court interests, which include computer engineering (one of his current hobbies is fooling around with a Raspberry Pi, a single-board computer). "I'm not going to hold back myself from enjoying other things publicly," Allen says. "I'm not going to hide that."

Teams also asked Allen in pre-draft interviews if he'd have the courage to try to block dunk attempts from stars like James and Antetokounmpo -- a question that's typical in these settings. He heard the same question from his youth coaches in Texas. And his answer has always been the same:

"'Are you going to jump with all of the high-flyers?'" Allen says. "I kept telling them, 'Yeah I will.'

"I think they didn't believe me."

They do now. Over the past few months, Allen has showed those coaches, executives -- and anyone else watching -- that he can win the midair battles against some of the league's best.

But he may need to find another way to unwind after a game in Brooklyn. Since his block party started, Allen has been recognized a bit too often, ending any chances at a peaceful trek back to his apartment. 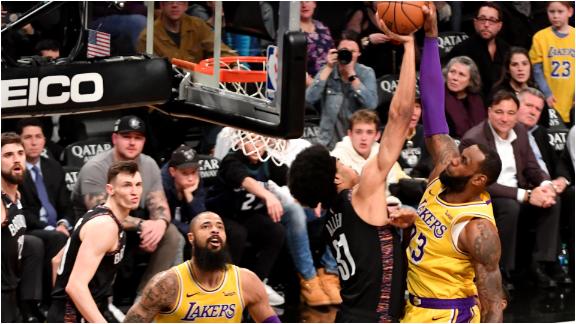 Jarrett Allen making his name blocking NBA's elite
Check out Jarrett Allen's blocks on some of the NBA's best athletes and scorers. 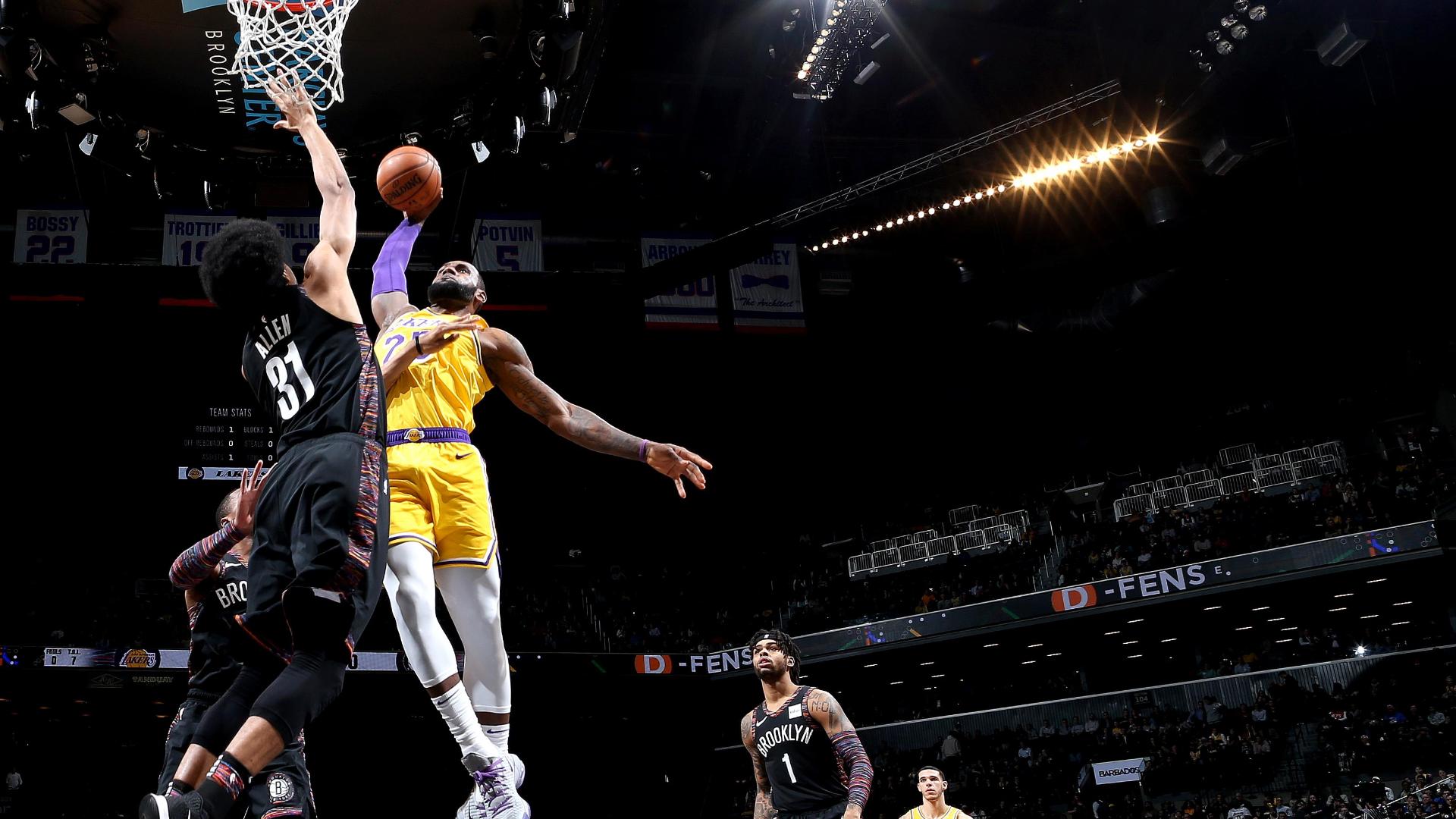 Allen meets LeBron at rim for huge block
LeBron James drives the lane and reaches back for a one-handed jam, but Jarrett Allen doesn't back down, meeting him with an emphatic rejection. 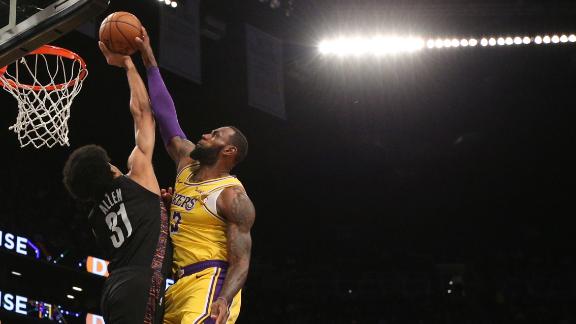