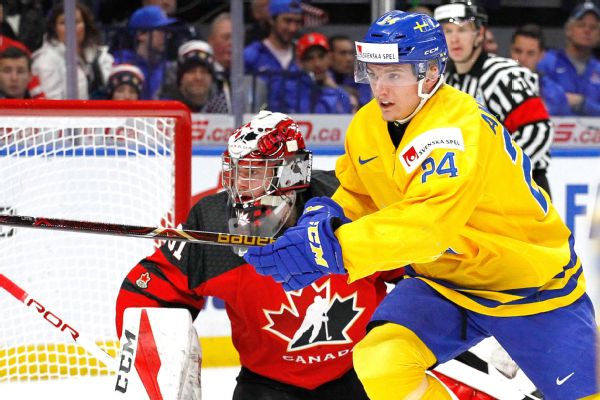 Swedish captain Lias Andersson threw his silver medal into the crowd on Friday night, after a 3-1 loss to Canada in the U20 World Junior Championship final in Buffalo, New York.

Andersson, selected seventh overall in the 2017 NHL draft by the New York Rangers, received his medal from an International Ice Hockey Federation official after the game. He glanced at it and then removed it. After skating back to his teammates, he tossed his runner-up trinket to a fan in the stands.

"He wanted it more than me. He's going to have it at home in a box or whatever," joked Andersson after the game.

Andresson later elaborated on this motivation. It turns out he earned a silver medal in the under-18 world championships, too, after losing to Finland in 2016. "I haven't checked it in two years," said Andersson. "I lost last time. I didn't need another."

Andersson was censured by many hockey pundits and Canadian fans on social media for a perceived lack of sportsmanship in throwing his medal. Yet perhaps the more surprising reaction is how many respected observers of the game came to his defense, acknowledging that what Andersson did was an understandable emotional release for a 19-year-old after a crushing defeat.

The venerable Bob McKenzie of TSN called him a warrior and wrote "he could play on my team, if I had one, any time." Former Team Canada goalie Corey Hirsch praised him, quoting that noted philosopher Ricky Bobby: "If you're not first, you're last."