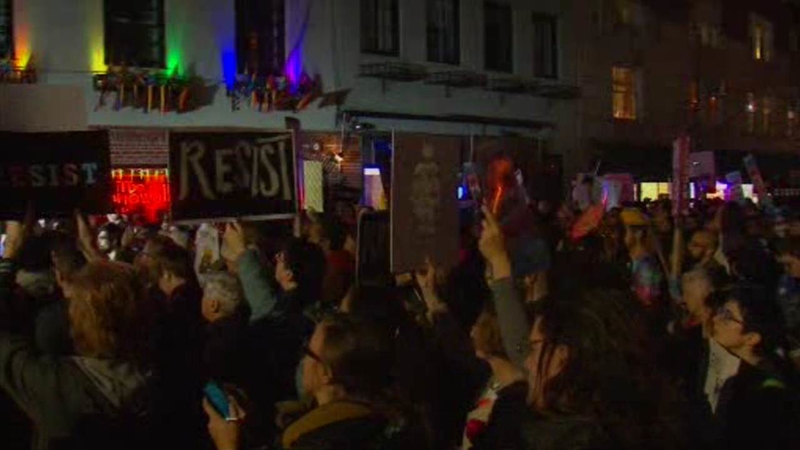 GREENWICH VILLAGE, Manhattan (WABC) -- Protesters hit back the only way they could against President Trump's rollback of transgender protections in public schools, they took to the streets in droves.

Hundreds came out Thursday night, standing in the shadow of the famed Stonewall Inn, to protest the Trump administrations rollback of some transgender protections in schools.

Many brought their children to the protest, and seemed convinced that this protest and involvement will be a part of their children's upbringing during the Trump presidency.

"We brought the kids because it directly impacts our children and their future," said Nora Moscowitz, a mother. "We want to make sure that they are growing up in a world that is accepting."

"The main thing we are worried about is the bullying that kids are facing, and we just want kids to go to school and be happy, and be comfortable, and we want to stand up for them so that they don't have to stand up for themselves," said Kara Grimes, a mother.

Among the speakers were Congressman Jerrold Nadler, who says Washington has become a difficult place for him.

"Right now it can be very frustrating because we are losing votes on a party line vote, certainly in the judiciary committee where it comes down to civil rights or voting rights," Rep. Nadler said.

There is a sense among many that it could be a rough four years for civil rights in general, but that sense has also produced an energy many outside the Stonewall Inn said they had not seen before.

"This is the upside is seeing the unity among so many people, seeing this unity, seeing this fight amongst so many people, it's beautiful," said Derek Bridgewater, a protester.
Related topics:
politicsgreenwich villagenew york citydonald trumptransgenderprotestthe stonewall inn
Copyright © 2022 WABC-TV. All Rights Reserved.
TOP STORIES
TX school shooting leaves at least 19 children, 2 adults dead
Uvalde school shooting: What we know about 19 kids, 2 teachers killed
Jersey City police fatally shoot man after report of shots fired
Fleet Week New York returns to the Big Apple
Texas school shooter bought 2 rifles within days of turning 18
AccuWeather: Sun and clouds with a cool breeze
Matthew McConaughey: 'We must do better' after massacre in hometown
Show More
Josh Duggar sentencing on child porn conviction expected Wednesday
'People are getting numb': Texas mom reacts to mass shoot at school
A look at some of the deadliest US school shootings
Rep. Antonio Delgado to be sworn in as NY lieutenant governor
Biden to sign policing order on anniversary of Floyd's death
More TOP STORIES News