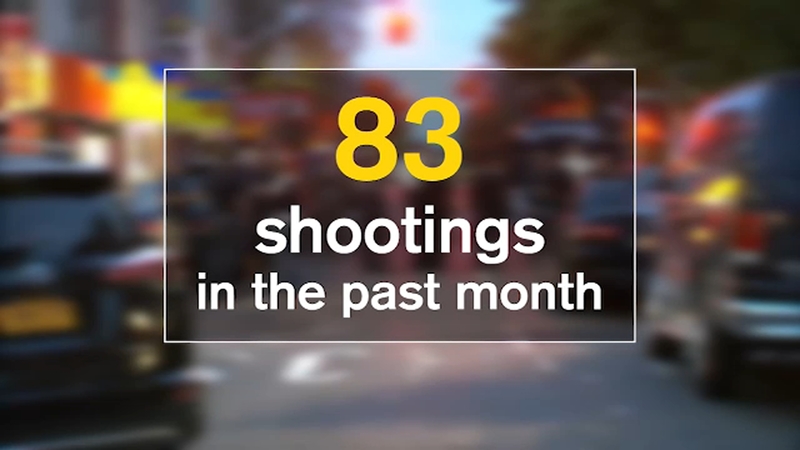 Rash of innocent bystanders caught in crossfire in past week

MORRISANIA, Bronx (WABC) -- The NYPD says it is "unacceptable" that multiple innocent bystanders have been shot by stray bullets in New York City in the past week.

A woman who only wants to be known as Denise is one of three innocent New Yorkers shot Sunday afternoon on a street corner in Morrisania.

She was lucky to only be grazed in the knee, but she is nervous about her safety.

"It's horrible, I wouldn't wish this on my worst enemy," she said.

The other two victims shot in that incident were also not seriously hurt.

But they are all in good company. About a dozen people have been hit by stray bullets in June alone, including 11-year-old Jayden Grant who may never walk again after he took a bullet to the chest in Crown Heights last Thursday.

Police say he was shot by a gang member gunning for a rival.

"Obviously this many incidents in a short time is unacceptable, completely totally unacceptable," NYPD Chief of Department Terence Monahan said.

It's been a violent month for the NYPD. There were 83 shootings citywide in the past four weeks, compared to 67 in the same period last year.

Since January, shootings are up around six percent from last year's record low.

It's a disturbing trend, but in the big picture, New York is still overwhelmingly safer than during the "bad old days"-- shootings are down 86 percent since 1993.

But those statistics don't mean much to Denise.

"My heart does go out to the other victims that shouldn't have ever got hit and I hope they catch the person who did this to us," she said.

Police are still standing guard just a few dozen feet from the spot where Denise was grazed by that bullet. So far, no arrests have been made.