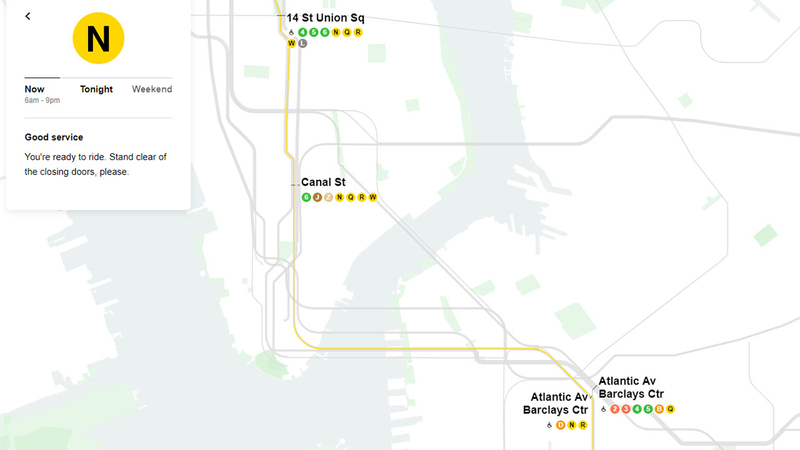 NEW YORK CITY (WABC) -- The MTA on Tuesday launched its first-ever "Live Subway Map," a first of its kind digital guide to navigating the subway system in real time.

The new map, which allows riders to plan trips more easily by taking into account service changes and seeing train movements as they happen, is the byproduct of an 18 month-long public-private partnership between the MTA, the Transit Innovation Partnership, and Brooklyn-based global design and technology firm Work & Co.

A new study has found that nearly a quarter of New York City Transit workers who were surveyed reported having COVID-19.

Currently in its beta phase, the map will ultimately replace The Weekender and will serve as the primary interactive means for moving around the subway system.

The Live Subway Map beta merges the best features of the existing printed map with the distinctive "Vignelli" approach of The Weekender by overlaying clear and detailed track routes atop a geographically-correct street grid that becomes more detailed as the user zooms in.

"We built this map for the weekend warriors," New York City Transit Chief Customer Officer Sarah Meyer said. "For those who work at night and who are impacted by service changes."

RELATED: MTA in worse shape than during the Great Depression, officials say

Work & Co designed and developed the web-based digital tool on a pro bono basis with the goal of making the lives of New Yorkers easier. The map allows customers to navigate the system in an intuitive and digital way, and riders will no longer have to read through printed station signage to determine how they should travel throughout the system.

"It's great for us to have the opportunity to take the maps to the times we're living in and have a digital first approach to a problem that some many problem tried to solve in the past," Work & Co. founding partner Felipe Memoria said.

But while technology will help streamline the commute, the transit system needs straphangers. Ridership is down 70% from before the pandemic, and financially, the MTA is on the edge of a cliff.

The MTA live subway map is free, accessible through a browser at Map.MTA.info, and the MTA wants feedback from riders.

Features of the MTA Live Subway Map beta include:
--Automatically updating train lines: Train lines will redraw themselves using real-time data to illustrate current and accurate train service status. Sections of train lines fade out where a train line is not running and are denoted with dashes if trains are running in a single direction.
--Moving trains: The user will see trains moving that help signal to users that the map is live and also reflect real-time locations of trains throughout the subway system.
--Zoom-In features: Greater map detail is exposed as the user zooms in, including the ability to see individual train lines, subway entrances, station names, and street locations and names.
--Subway accessibility: The new map highlights accessible stations and provides updates to accessibility related equipment like elevators and escalators.
--Emergency alerts: The map uses the MTA's data feed to convey official MTA communications for emergencies.
--Airports: The map visualizes both of NYC's major airports and the primary means of accessing them via the MTA system. The map indicates which train lines connect with buses and the AirTrain to be able to access the airports. Users can tap or click on an airport to learn even more about how to access the airport using public transportation.
--Add to home screen for quick reference: iPhone and Android users can add the map to their homescreen to access the map more quickly. The web-based map then behaves like a standalone app. Future integration with the MYmta app may be developed.
--Dynamic and shareable URL: The URL will store the location a user is looking at, the zoom level they are on, the train line they've filtered by, and whether or not accessibility mode is turned on. This allows users to share exactly what they are looking at with each other, or, to save or bookmark a unique URL based on their preferred train line.