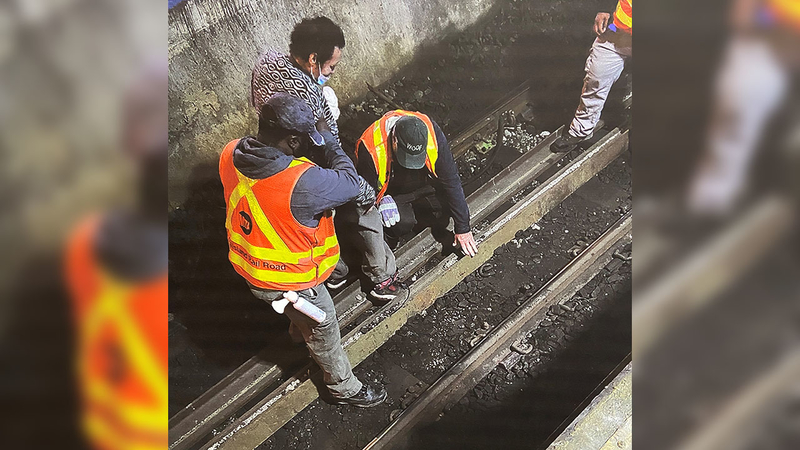 EAST NEW YORK, Brooklyn (WABC) -- Five members of a Long Island Rail Road work crew were honored Thursday, hailed as heroes for jumping into action to safe the life of a man who fell onto the subway tracks in Brooklyn.

The incident happened during rush hour Wednesday at a subway station in East New York.

Officials say the victim accidentally fell onto the tracks and got his foot wedged between the rails.

"This couldn't have gone any better if we had practiced it," Woods said. "I did what I could to help. The man was very disoriented, and I was nervous that he was going to touch that rail. I'm just glad we were all able to get out of there safely."

The employees usually work as a team to assist with safety protection on the tracks while crews are performing roadwork on an adjacent project, and they put their collaborative skills to use when it mattered most.

"We heard a thud, turned around, and that's when we noticed the gentleman down on the tracks, laying draped across the third rail protection board," Hartley said. "It's a scary situation, and he could have been electrocuted at any moment. At that point, our first reaction was to make sure we stopped any train that could come through."

One quickly contacted the tower operator to stop trains coming from through the area, while two others served as lookouts to make sure no trains were approaching.

"My first instinct was to turn my radio to channel one and try to let any incoming traffic coming into the platform know that there was someone on the tracks and they could not come in," Augustine said. "My role was to make sure there were no westbound trains coming in until it was safe and the man got off the tracks."

Meanwhile, others worked to calm the man down until it was safe for them to go onto the tracks themselves to help him up.

"We tried to keep the man calm, and all of us as a team, we saved this man's life," Hendy said. "And he's able to go home to his family because of us. Behind the scenes, we all do our jobs, and we're glad we could help this gentleman."

The employees completed the rescue and walked him to the end of the platform where FDNY and NYPD crews were waiting.

"I was the west end lookout during the operation to make sure that I could stop any eastbound train traffic in a sufficient amount of time so nothing bad would happen and they could safely get the man off the tracks," Rattigan said.

The man was checked out by EMS and wasn't seriously hurt.

"Our employees always rise to the occasion, and this is a true example of the heroes who work among us," LIRR President Philip Eng said. "Not only has the workforce stepped up ensuring invaluable service in our fight against the pandemic, but the quick action by Gregory, Kevin, Larry, Stacy and Shelwyn saved a life. Not exactly verbatim from a well-known superhero, but in this case, it fits: 'Faster than a speeding locomotive.' We cannot thank them enough."