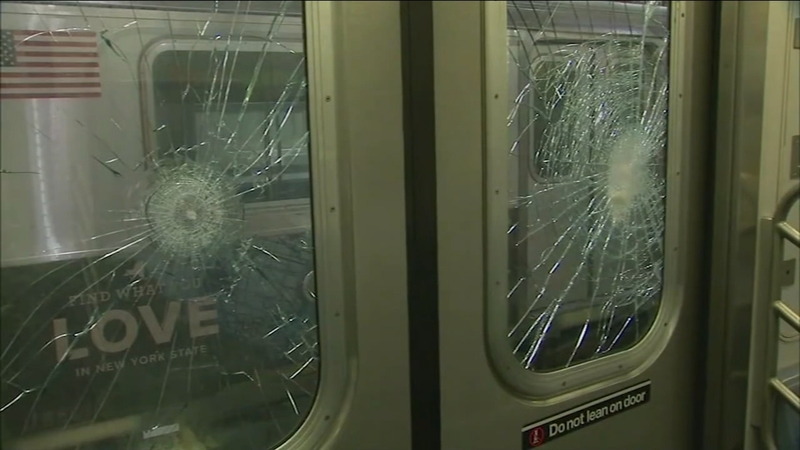 NEW YORK (WABC) -- The vandal believed to be responsible for smashing more than 400 windows on subway cars since April struck again Friday night.

Sources tell Eyewitness News that two more incidents were discovered on 7 trains, one at the Vernon Boulevard-Jackson Avenue station and another at the 103rd Street-Corona Plaza station.

The MTA says this has happened to more than 400 windows, and they can't replace them fast enough.

There have been at least 63 window-smashing crimes, but there could be many others.

MTA chief safety officer Pat Warren says one or more people are using weapons to smash out the windows on subway cars -- from inside the trains. One person is linked to the incidents, but there are also countless others also involved.

Police are looking for a man wanted in connection to a three-month subway vandalism spree.

"This takes considerable force," Warren said. "This has to be done with a blunt instrument of some kind. A hammer, a pipe, a baseball bat. Something significant."

So many windows have been broken that the MTA is running out of replacements. That will soon result in more time between trains - translating to longer waits on subway platforms and more crowded subway trains, two things MTA is actively trying to avoid during the pandemic.

There are photos of the person police believe is responsible, but the attacks usually happen on empty cars, so there have not been any eyewitnesses. Police say if anyone recognizes the suspect, please give the cops a call because this crime is costly.

MTA says they do not know why there has suddenly been "a considerable" uptick in vandalism.

They say the windows are specially designed and different windows fit different model train cars, and that there simply aren't enough subway train windows in the supply line to repair them at the rate they are currently being broken.

Most of the vandalism seems to happen when passengers are not on the trains, resulting in a frustrating lack of eyewitness accounts. They are still trying to nail down exactly when and where the vandalism is occurring.

Anyone with information in regard to this incident is asked to call the NYPD's Crime Stoppers Hotline at 1-800-577-TIPS (8477) or for Spanish, 1-888-57-PISTA (74782). The public can also submit their tips by logging onto the Crime Stoppers website at WWW.NYPDCRIMESTOPPERS.COM, or on Twitter @NYPDTips.

RELATED | Woman stalked, catcalled by man who exposed himself on subway