5 people hurt in livery cab crash in the Bronx 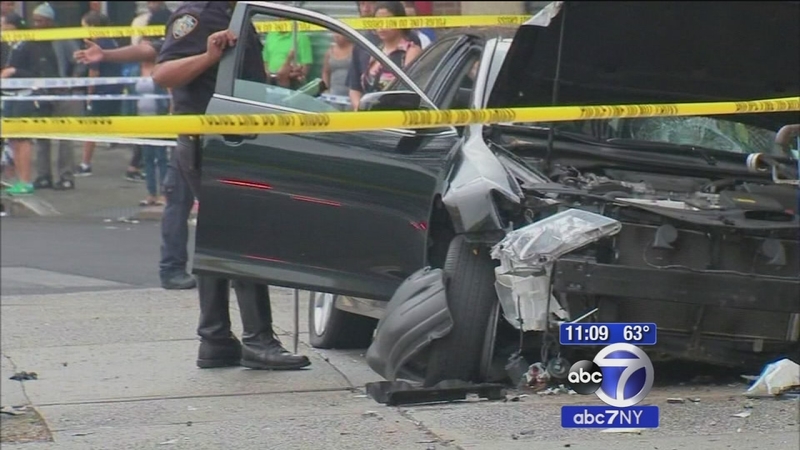 FORDHAM (WABC) -- The Taxi and Limousine Commission has suspended the livery cab driver who lost control, hopped a curb in the Bronx, and hit four small children and a mother Wednesday.

The accident happened on East Kingsbridge Road in the Fordham section just before 8 a.m.

The most seriously injured is an 8-year-old girl, with injuries to both legs and internal bleeding, who is in critical but stable condition.

Her younger brother, a 5-year-old, has injuries to his leg, chest trauma, cuts and bruises. Both have been stabilized at Jacobi Medical Center.

Two other boys, ages 10 and 7, suffered minor injuries. The 33-year-old mother is in stable condition at the same hospital.

One of the injured children is home from the hospital and talking to Eyewitness News.

He said he doesn't remember much about the accident. The front bumper of the livery car hit him and pushed him forward.

"I remember when a car was over me, when he came and throw me under, I don't remember anything more," he said. ("Did you black out, go unconscious?", we asked.) "I was like asleep," he said.

("When you woke up, what did you see?") "I was with my grandmother who woke me up and helped me get up and then the ambulance came," he said.

He was treated and released from the hospital Wednesday afternoon.

"To witness something like that, it's bad, it's something I don't want to see again," said eyewitness George Perez.

Surveillance cameras captured kids heading to school, their parents by their sides, but in a split second it was evident from the look on their faces and body language that something was very wrong.

"That's when I saw people flying in the air and so I ran," said Perez.

The impact is too graphic to show, as the black car plowed into the five people.

"He was waiting for his wife to come out of the store and the car just came so fast he didn't have a chance to get out of the way," said a translator for Antonio Acosta, the uncle of one of the victims.

His nephew was among those hit. Antonio picked up the child who was bloody, but not seriously hurt.

But another child was, a little girl who was pinned under the car.

"She wanted her dad so this lady gave her a cell to call her dad and she tried and she looked at everyone and said, I forgot his number and that's when everyone broke down," said Perez.

"Miguel wake up, don't close your eyes, please tell me if your'e watching me, Miguel your little sister is going to be here soon, you're not alone," she said.

The Uber driver, who was not injured, stayed at the scene. No charges have been filed at this time.

Several people tried to help lift the vehicle and get it off of those who were trapped.