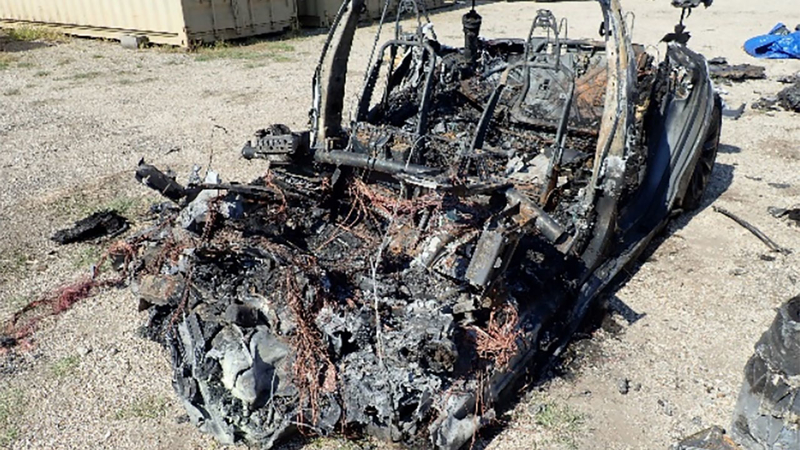 THE WOODLANDS, Texas -- The Tesla Model S involved in a fatal crash in Texas last month was likely not in autopilot mode, according to a preliminary report released by the National Transportation Safety Board (NTSB). The agency also said the owner was initially in the driver's seat.

In recent weeks, the carmaker's CEO Elon Musk disputed claims of the autopilot feature being activated when the crash happened, something that the Harris County Precinct 4 Constable's Office said in the immediate aftermath.

The 59-year-old owner and a 69-year-old passenger, both identified as Dr. William Varner and Everett Talbot, respectively, died in the April 17 incident.

"According to the report the crash trip began at the owner's residence. Footage from the owner's home security cameras show the owner entering the driver's seat and the passenger entering the front passenger seat," the NTSB said. "The video also shows the car slowly entering the roadway and then accelerating down the road away from the camera and out of sight."

The NTSB said the car was equipped with autopilot, but in order for the feature to work, both traffic-aware cruise control and autosteer systems must be engaged. The NTSB conducted a test at the crash site and found the autosteer system was not available on that part of the road.

"Based on examination of the accident scene investigators have determined the car traveled about 550 feet before departing the road on a curve, driving over the curb, and hitting a drainage culvert, a raised manhole and a tree," the NTSB said.

The car's restraint control module - which can record data related to vehicle speed, seat belt status, acceleration and airbag deployment - was damaged but recovered by NTSB for evaluation. The steering wheel was also shipped to the NTSB lab for analysis.

The NTSB said its investigation is ongoing.

Full document: NTSB's preliminary report on Tesla crash from April 17, 2021. (If you're viewing this on a mobile device, view the report here.)


"You know, you're warned when you pick up your Tesla that this is just a driving assistance system. It's not, it doesn't drive yourself yet," Texas Tesla owner Stephen Pace said. "That's the goal that eventually they will be able to drive themselves, but today it warns you if you don't touch your steering wheel constantly. It checks for weight in the seat, so it won't just start. So there's many safety protocols built into this system."