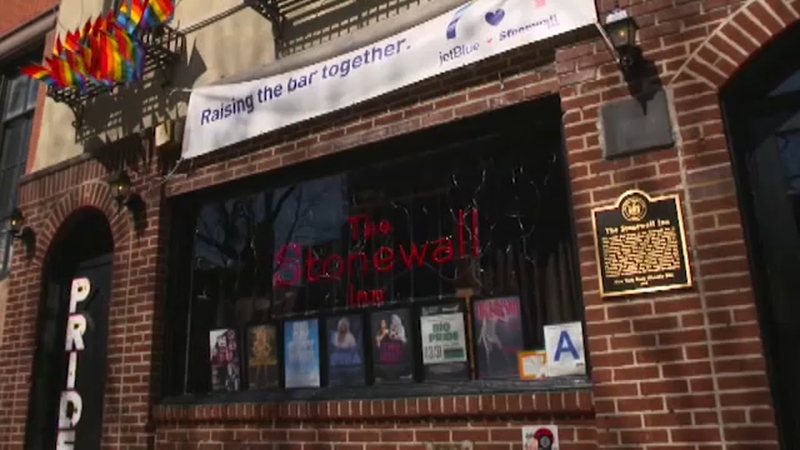 NEW YORK (WABC) -- Friday marked 50 years since the uprising at The Stonewall Inn, where a police raid sparked a rebellion that fueled the modern LGBTQ rights movement, and thousands of people gathered outside the landmark bar for a star-studded event.

Celebrities, New Yorkers and visitors from around the world converged on the Stonewall, where Gaga told those gathered that they "are the definition of courage."

Keys serenaded them with her hit "Girl on Fire" and other songs, including "True Colors," a 1980s hit for Cyndi Lauper. Its chorus declares: "Your true colors are beautiful like a rainbow."

Goldberg urged the throng to "remember the people who didn't make it this far" after helping pave a way forward for LGBTQ rights.

It was a raid in the early morning hours of June 28, 1969, that started several days of clashes with police -- who would routinely raid underground gay bars.

Five decades ago, the Stonewall was part of a Greenwich Village gay scene that was known, yet not open. At the time, showing same-sex affection or dressing in a way deemed gender-inappropriate could get people arrested, and bars had lost liquor licenses for serving such people. Some gay nightspots simply operated illegally.

The riots spilled out into the street, and that's how the Pride March was born. And for this weekend's largest ever march, security is tight.

Eyewitness News got a rare look inside the NYPD's Intelligence Bureau Operations, including the call center where they investigate tips. They also has live feeds of hundreds of cameras.

On Sunday, there will be police just about everywhere -- some visible, and others not.

"Expect to see thousands of highly visible officers," NYPD Chief of Department Terence Monahan said. "In addition to the cops you see, there will be plenty in plainclothes you don't see. They will be mixed in with the crowd to monitor anything suspicious. Although we have more security for World Pride than in years past, we still need the public's help."

Many streets will be closed on Sunday, stretching from the Village all the way up past Times Square.

The MTA is increasing subway service, including the L train which will run every four minutes.