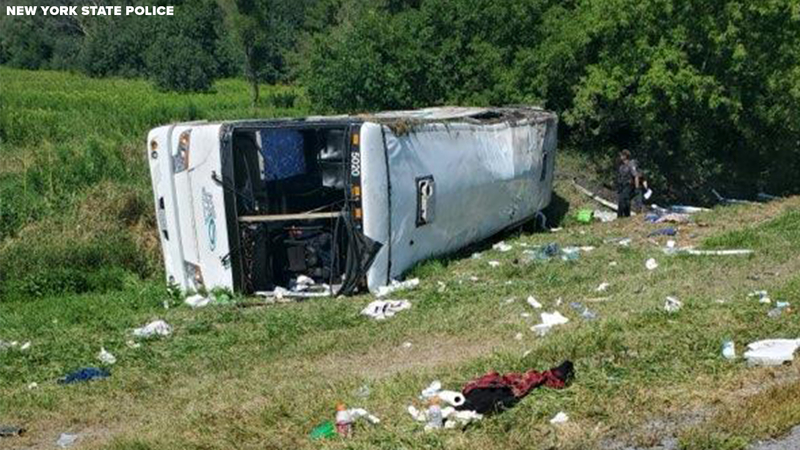 NEW YORK (WABC) -- Dozens of people were taken to the hospital with injuries following a rollover crash involving a tour bus in Upstate New York Saturday.

New York State Police say a preliminary investigation determined the crash happened just after 12:30 p.m. on the New York State Thruway as the bus was heading westbound near exit 40 (Weedsport) in the town of Brutus.

They say the bus exited the roadway for an unknown reason and rolled over onto the grassy shoulder.

There were a total of 57 passengers, including the driver, Fermin P. Vasquez, and all were taken to the hospital for injuries ranging from minor to serious.

A teenage boy has died after being struck by lightning during a fast-moving, pop-up thunderstorm that rolled over Orchard Beach late Thursday afternoon.

The tour bus is from JTR Transportation, based out of Poughkeepsie. Police say the bus was headed to Niagara Falls.

The investigation is ongoing. State Police are asking for anyone who may have witnessed the crash to contact investigator Brad Holcomb, SP Waterlo at 315-539-3530 with any information.