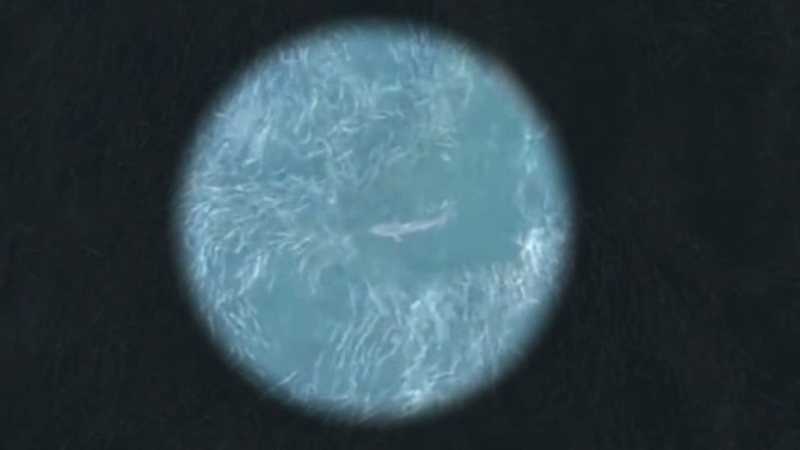 Business as usual at LI beaches despite recent shark sightings

TOWN OF HEMPSTEAD, Long Island (WABC) -- Shark sightings continue off the coast of Long Island Thursday, but authorities say none have been spotted close enough to the shore to garner any concern.

Swimming has been halted multiple times at various beaches this week after sharks were seen, including an incident Monday in which a lifeguard may have been bitten.

With the threat of storms and the wind already whipping up on Long Beach, most people were staying out of the water anyway, except the surfers.

Swimmers were also briefly held from going in the water at Robert Moses State Park.

Schools and camps were still full speed ahead with the sharks mostly too far away to shut anything down.

Still, several sharks were picked up in drone footage from ABC News Thursday morning about 3,000 feet off the shores of Long Beach.

"I think the lifeguards and the security are very, very good," beachgoer Adam Stupak said. "They're keeping an eye out. I know Nassau County, the police, have helicopters going back and forth."

On Wednesday, Lido Beach was closed to swimming for part of the afternoon after two sharks were spotted only 20 yards off shore.

They were sharks known as black tip reef sharks, which feed in shallow waters.

"This is their backyard, so they're everywhere," dad Chris Ehrhardt said. "People just don't realize that. So you've got to respect it, you've got to have fun with it, and the the kids, just don't make them fear it."

Parents at the surf camps were well aware that the ocean belongs to us all, including the sharks, and we must deal with that.

"Well of course I have super anxieties with my kids in the water right now, with that, but I don't want them to be afraid," mom Christina Smart said. "(I) just hope the drones and everybody in the water is keeping our kids safe, and pray for the best, I guess."

So if you or your children are in the water, someone should be watching. These certainly aren't the first -- and they won't be the last -- sharks we see this season.