Isaias: Anger, frustration in CT as hundreds of thousands remain in the dark 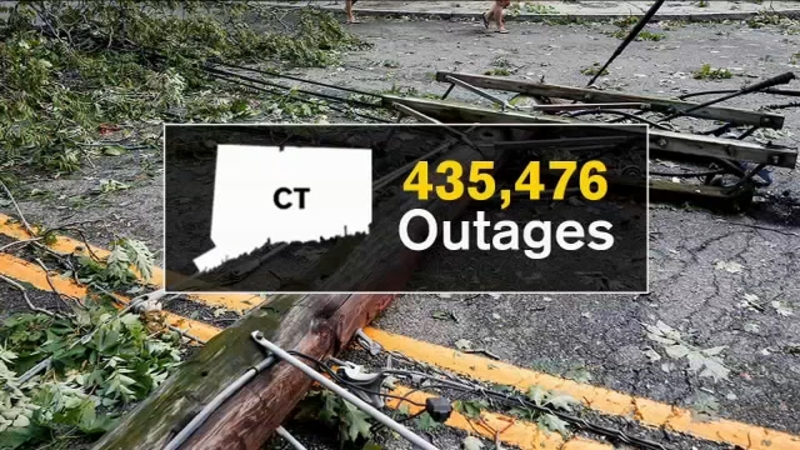 Isaias: Anger in CT as hundreds of thousands remain powerless

NEW YORK (WABC) -- There is growing anger and frustration in Connecticut, where utility companies have hardly put a dent in the number of widespread outages from Tropical Storm Isaias.

"We're going to be riding hard to make sure we get this done," he said. "I can tell you that Eversource maybe only had 450 line crews a few days ago. They'll have over 1,100 within the next 24 hours and I really want to see more progress."

Lamont said two people died in the state, and five others suffered serious injuries in the storm.

One person was fatally wounded in a chainsaw accident in Newtown, though that person's name hasn't been released. A 66-year-old Naugatuck man, Raymond Schultz, died when a tree fell on him as he was clearing branches from a road.

Nearly the entire town of Westport was without power after felled trees knocked down power lines, and at one point, crews were dealing with more than 200 incidents of blocked roads due to downed trees.

"With more than 700,000 customers experiencing power outages, we need to take several emergency steps that will facilitate restoration," Lamont said. "I remain in consistent communication with municipal leaders and utility officials so that we can move resources to where they are most needed at this time. I continue to have regular communications with our Emergency Operations Center, which is managing both the response to this storm and our continued response to COVID-19."
EMBED More News Videos

President Donald Trump approved an emergency declaration for Connecticut that will allow the state to request federal aid.

Lamont said he spoke with the president by phone Thursday night and urged him to expedite the process. The Federal Emergency Management Agency told state officials on Friday morning that the declaration was approved.

More than 700,000 homes and businesses were in the dark statewide at the peak of the outages.