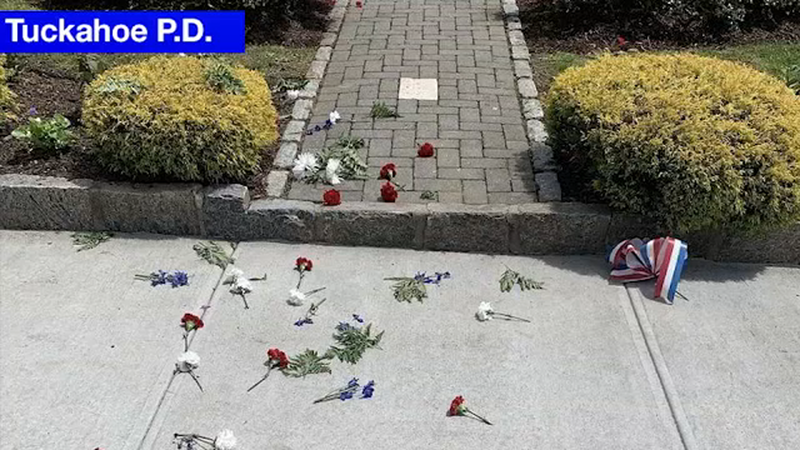 TUCKAHOE, Westchester County (WABC) -- A local police department is picking up the pieces with the help of its community after a disturbing act of vandalism over the weekend.

Karen Campanile waltzed into her village police department Monday afternoon armed with a tray of sandwiches as a gesture of appreciation.

"This is a community, we love our police and we respect them and we always show they that and we stand behind them," Campanile said.

On Saturday, shortly after the annual police memorial ceremony, investigators say Roy Alexander of Tuckahoe came to police headquarters armed with a bat.

The chief said the 26-year-old destroyed some decorative wreaths at the memorial that have since been replaced.

"That's their workplace, those police cars for the officers, so, if somebody worked in an office and somebody came in and destroyed their office, well for the police officers the patrol car is their workplace," said Tuckahoe Police Department Chief John Costanzo.

Police arrested Alexander, who has had numerous run-ins with the village's 23 law enforcement officers.

The neighboring town of Eastchester loaned two of its police cruises to Tuckahoe so service and protection for the square mile village could continue.

The repair work is yet to begin on the damaged vehicles but will likely cost at least $15,000.

"The glass in these Fords are super expensive, they have sensors in them," said Eddie Quintieri with Fleetwood Collision. "It's just programming that has to be done because the cars have lane change and everything. It's just not a matter of putting a piece of glass in anymore."