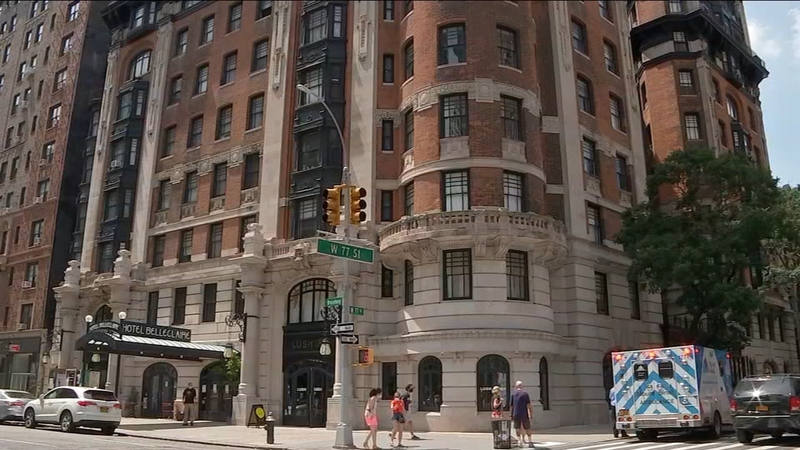 Sex offenders at Manhattan hotel will likely extend their stay

UPPER WEST SIDE, Manhattan (WABC) -- A handful of convicted "sexually violent" level 2 sex offenders who recently moved into an Upper West Side hotel that is now set up as a homeless shelter will likely stay there, over the objections of neighbors.

Neighbors like Jenna McIntyre Cohan, a mother of three children all under the age of 10, said she was concerned because the Hotel Belleclaire at 77th and Broadway is located just one block away from her children's school, P.S. 87, at 77th and Amsterdam.

"It's dangerous, it's horrifying, and it's a very real threat," Cohan said. "If you are a registered sex offender or if you are bringing drugs into the neighborhood with children, that's what people have a problem with."

Amid the pandemic, it's one of at least 139 city hotels converted to a shelter for social distancing. The hotel's owner has not responded to multiple requests for comment.

Some of the offenders are accused of abusing children as young as 4-years-old. The shocking revelation was first posted on Mike Mishkin's website, ilovetheupperwestside.com.

"Ultimately, people have the right to know what's happening in their neighborhood and on their blocks," Mishkin said of the posting.

Originally, the sex offenders living at the hotel also included the most dangerous level 3 offenders, but on Thursday Mayor Bill de Blasio told Eyewitness News the city just took action to remove level 3 offenders from the shelter, a group which is legally barred from living within 1,000 feet of a school.

As of Friday afternoon, the online registry still had not been updated with that new information. Level 1 and 2 offenders face no such residency restriction.

"A really bad mistake was made, and someone who was a sex offender, who should not have been (placed in the hotel) was," de Blasio said. "And that was caught quickly and immediately fixed."

Cohan said that explanation was not good enough.

"It should never have happened," she said. "They shouldn't be there."

She wants all the offenders out of the hotel, but her City Council representative, Helen Rosenthal, told Eyewitness News that was unlikely because they are legally allowed to stay. Rosenthal urged patience.

"This is very temporary," she said. "In the same way we have to understand COVID is temporary."

A Department of Homeless Services Spokesperson issued the following statement to Eyewitness News:

"No residency-restricted sex offenders are residing at this location. The City of New York places all clients in appropriate locations in accordance with State Law - and we provide shelter to New Yorkers experiencing homelessness regardless of background. This includes helping people rebuild their lives and grow through second chances as they get back on their feet. New Yorkers experiencing homelessness are our neighbors - and the notion that they are not welcome in some neighborhoods for any reason is an affront to basic decency. We don't discriminate based on people's previous experiences or backgrounds, and we will not create gated communities within our City - we extend a helping hand, no matter what. Now more than ever, these services and supports, this empathy and humanity, are essential, across all communities, across the five boroughs - and our commitment to providing them to those in need must be unwavering."