Fans return to stands at US Open in Queens 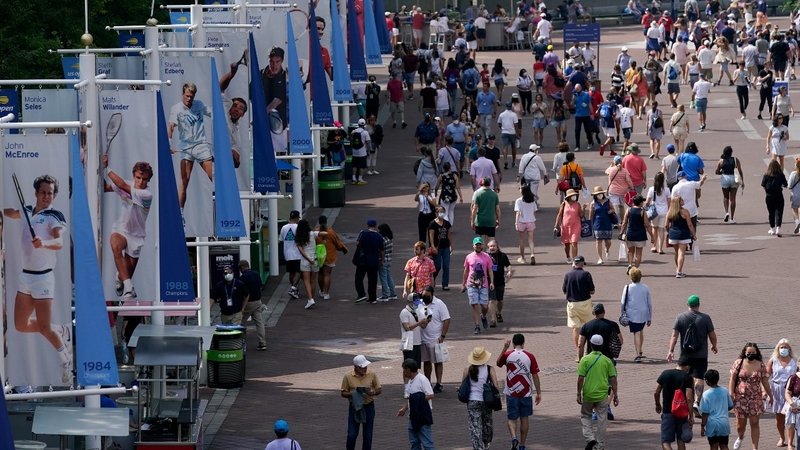 FLUSHING, Queens (WABC) -- Play has started at the U.S. Open, with fans back in the stands for the final Grand Slam tournament of the season.

The event was held without spectators last year due to the pandemic but stands are allowed to be filled to 100% capacity this year. Those 12 and older must show proof of at least one dose of a COVID-19 vaccine to enter the Billie Jean King National Tennis Center.

Athletes will be regularly tested throughout the tournament. A positive test would mean they would have to withdraw.

"Honestly, I know I haven't played that many matches but I feel pretty confident with where I am right now," Naomi Osaka, the defending women's champion, said.

Several tennis stars will not be playing this year, including Serena and Venus Williams who withdrew after suffering injuries.

Roger Federer and Rafael Nadal are also out.

The U.S. Tennis Association says there have been delays as fans try to enter the U.S. Open on the first day of the tournament.

The event was played without spectators in 2020 because of the pandemic. Fans are allowed to attend this year but have had trouble entering the grounds of the Billie Jean King National Tennis Center.

The USTA says the main cause of the delay has been bag searches. It says in a statement that patrons have brought an "inordinate number of bags this year" and all need to be searched.

It says it is exploring ways to improve the entry process for the remainder of the tournament. The organization added that the process of checking vaccination proof - a requirement for entry - was going smoothly.

For the next two weeks, some of the world's top chefs will also show off their talents.

She is introducing a new restaurant concept and has noticed similarities between the tennis court and in the kitchen.

"I just love tennis, I think it's an artful game, I don't think people realize how artful cooking is, I like the idea of mixing those two crafts together, so I'm excited," Guarnaschelli said.

Officials say 700,000 fans are expected over the course of the two-week long tournament.

Reigning U.S. Open champion Naomi Osaka was back on the tennis courts in Queens where she started to practice her play Thursday.