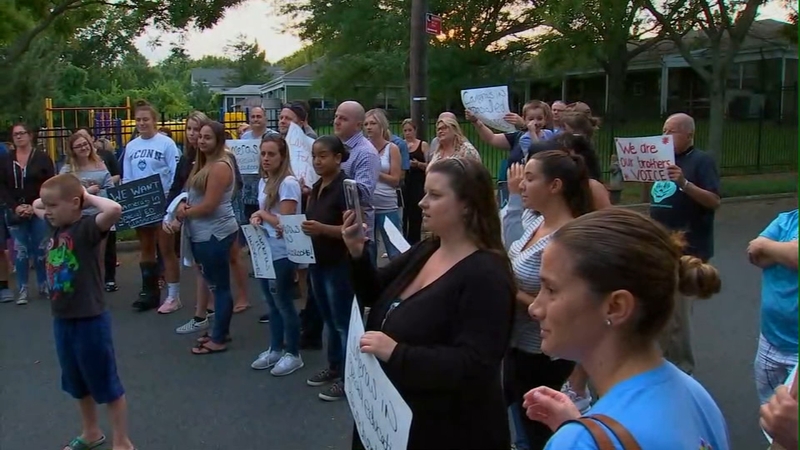 TOTTENVILLE, Staten Island (WABC) -- Concerned parents rallied Monday night at a preschool for special needs children on Staten Island after six staffers were fired over verbal abuse of at least one student.

4-year-old Christopher Torres has autism and isn't able to talk much or communicate in other ways. So it made the emotional abuse he lived through at school all the more shocking.

"It was horrific to think of somebody being mean to my child who couldn't come home and tell me somebody was being mean to him," said his mother Jennifer Torres.

A parent of another child in Christopher's class at the Volunteers of America school planted a recording device in her child's backpack.

"It was profanities, negative things," said his father Adam Torres. "Nobody should speak to any person like that, especially an adult speaking to a special needs child."

On the tape, Christopher's parents heard the teacher screaming at their son, cursing that he was a 'crybaby'.

"I feel betrayed, I feel devastated that anyone can be that mean and that I trusted these people," said Jennifer Torres.

"I had a knot in my stomach, complete gut-wrenching frustration, hurt, disappointment," said Adam Torres.

Christopher was adamant about not going back to school, but his parents didn't know why until they got the recording.

Monday night, a group of friends and other parents who have children with autism called for having cameras in classrooms that have children who are non-verbal.

The teacher who yelled at Christopher has been fired and Christopher doesn't attend the school anymore. He's found a new place where his parents say he is happy.

But they say having cameras in the classroom would have prevented all this in the first place.