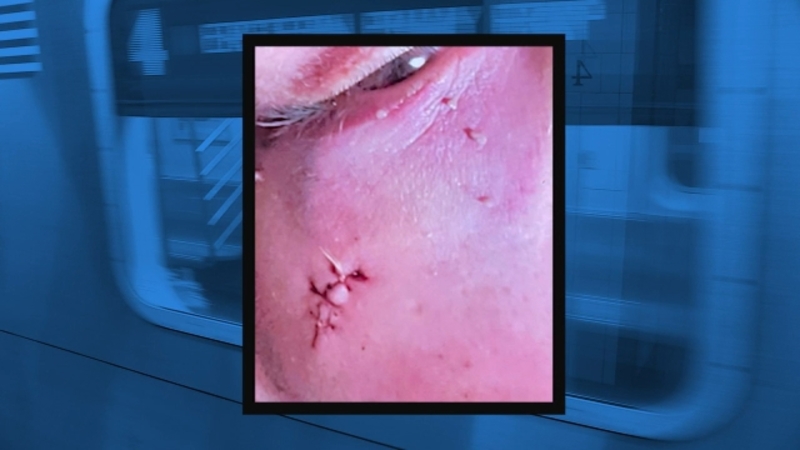 LOWER MANHATTAN (WABC) -- One of the victims of a violent spree of subway slashings in Manhattan is speaking out about the frightening encounter.

He's an everyday New Yorker, just trying to get to work.

"I'm just blessed to be alive. That's all that matters to me," said the victim of a violent subway attack.

On Friday night at his Harlem apartment, the 44-year-old man he told Eyewitness News about his terrifying encounter that happened earlier in the morning.

The victim wants to stay anonymous as he recovers from a slash wound to his face, barely an inch below his eye.

"I was just sitting down minding my own business, I was on my phone playing with my phone like people do, and it just happened so quickly, happened so fast," he said.

It was just after 4 a.m. as his downtown 4 train approached Union Square.

He was alone in the car when he says a group of teens approached.

One brandished a 12-inch serrated kitchen knife and attacked without a word.

"I tried to defend myself, I tried to fight him off," the victim said. "He got lucky and he hit my face."

It was one of four attacks on that train -- a bloody spree spanning just 12 minutes.
EMBED More News Videos

Four suspects are in custody after a string of slashings and stabbings on the subway that injured 5 people, the NYPD says.

Police say the four teenage suspects might have been in the midst of a gang initiation.

Regardless, it comes at a time of rising crime underground, with the MTA about to relaunch 24/7 service on Monday and begging the city for hundreds more cops to flood the platforms and ride the trains, and keep straphangers feeling safe.

"We're getting feedback that some people are seeing extra cops all over the city," NYPD Commissioner Dermot Shea said. "If somebody rides for hours and doesn't see someone then we have more to do obviously."

The victim feels there aren't enough police officers underground but isn't about to let this morning's attack change him.

"I have a scar on my face but it's not going to take over my life. They didn't put no fear in my heart," he said.