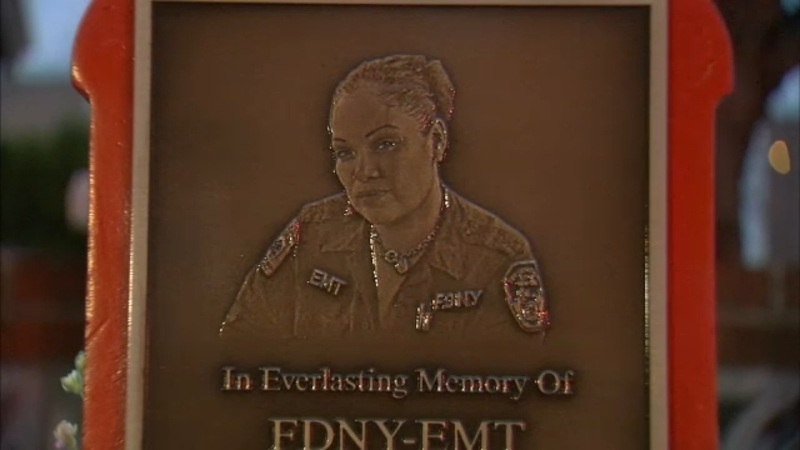 Slain EMT honored at vigil 4 years after she was killed

BRONX, New York (WABC) -- There was an emotional show of support Tuesday night for the family and friends of an EMT who was killed on the job four years ago.

Hearts were heavy at the corner of White Plains Road and Watson Avenue in the Bronx Tuesday night.

Loved ones gathered to remember Yadira Arroyo, an EMT with the New York Fire Department and mother of five who was struck and killed by her own ambulance four years ago.

Police say Jose Gonzalez stole the ambulance while Arroyo and her partner Monique Williams were responding to a call.
EMBED More News Videos

Jose Gonzalez pleaded not guilty when he was indicted on first-degree murder charges in the death of Yadira Arroyo.

Gonzalez reversed and ended up mowing Arroyo down, then dragged her along the road as he drove off.

He was charged with murder among other offenses. His trial is at a standstill while experts determine his level of competence.

"I am hoping and praying that this man will never see the streets again," Local 2507 President Oren Barzilay said.

In a statement, the Bronx County District Attorney Darcel Clark said in part, "we continue to work for justice for Yadira Arroyo and her family."
A tearful Williams tells Eyewitness News off camera, she retired from the department as the loss of her partner was too hard to bare.

"Not much training other than to recognize that there is a problem," Barzilay said. "That's why the city wants to go the route of putting a social worker with us now. Our EMTs are under constant assault."

They take comfort knowing the light Arroyo brought to this world will live on.