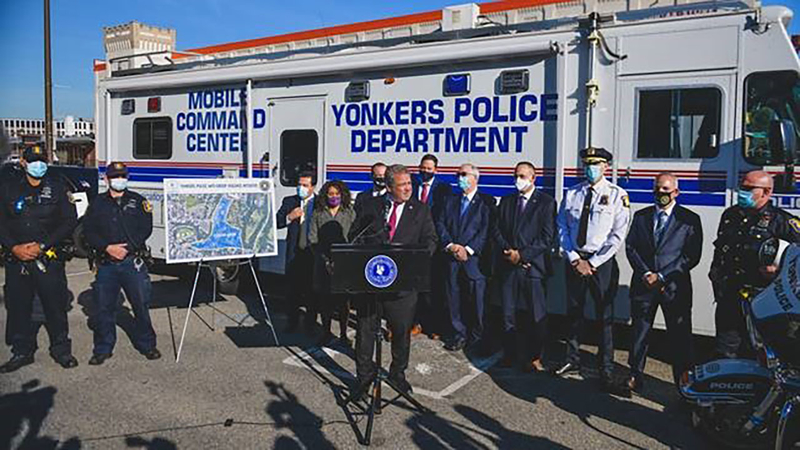 The city has experienced several gang violence disputes over the past few months, resulting in shootings and a homicide in the Ashburton Avenue corridor.

In an effort to suppress gun violence and reduce crime, the Yonkers Police Department identified a geographical priority area to roll out a series of anti-gang violence tactics.

The initiative includes the deployment of the Yonkers Police Department's Mobile Command Center, engagement in increased law enforcement presence, increased surveillance, and enhancement of its collaboration with local and federal law enforcement partners.

"After recent acts of violence in pockets of the city, I've asked our police department to organize a comprehensive approach to target the crime that have led to vicious acts," Spano said. "We will laser focus on these wayward individuals who inflict harm on each other and our community. We will not tolerate senseless acts of violence in our neighborhoods where responsible and hard-working individuals are trying to raise their families in a safe environment."

Measures include:
--Increase uniformed patrol and presence with additional foot posts (i.e. park and walks) in the focus area, including the Nepperhan and Ashburton Avenue corridors.

--Support Units including Emergency Service Unit, K9, Traffic and all 4th Precinct sector cars mandated to patrol the focus area when not on assignment.

--Deploy additional overt surveillance equipment within the focus area and enhanced existing equipment to increase reliability and quality.

--24-hour recall of a Gang Unit detective to all confirmed shooting incidents involving a group-violence member to provide intelligence and centralize information gathering.

--Increased collaboration with the Yonkers Public Schools system to identity and intervene in youth group-violence issues prior to escalation.

"Gun violence and gang activity has no place in our communities, and I want our residents to know that the Yonkers Police Department is committed to deploying every resource, new technologies and strategies to stop those who perpetrate these crimes," Mueller said. "With the support of Mayor Spano, our law enforcement partners, and our community members, we will work together to bring an end to this violence. The residents of Whitney Young deserve better."

To date in 2020, gang violence has accounted for 57% of shootings in Yonkers, with a 30% increase in group violence shootings year over year.

Overall, violent crimes are down 7% in Yonkers and down 12% compared to a three-year average. Compared to New York State's other Big 5 Cities, Yonkers has the least amount of bullet to body shootings in 2020.