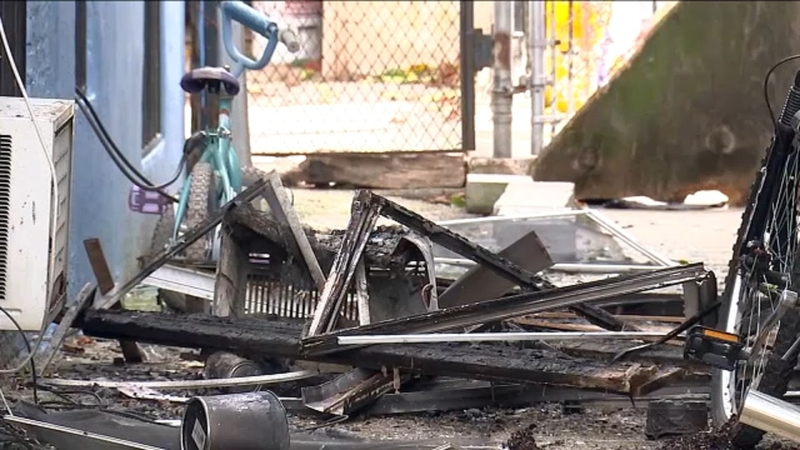 YONKERS, Westchester County (WABC) -- A man died and a woman was critically burned in a Yonkers house fire that appeared to have been intentionally set, according to authorities.

The fire broke out inside the Waverly Avenue home around 3:45 a.m. Monday.

The man, 75-year-old Victorino Martinez, was pronounced dead at the scene, while the woman, his 49-year-old wife, is hospitalized in critical condition with burns over 75% of her body at an area trauma center.

Fire officials say the blaze appeared to have been intentionally set, because an accelerant was found in the building.
The fire is being investigated as the result of a potential domestic dispute.

"There was an accelerant found at the scene, so it does obviously raise suspicions that this was not an accident," Yonkers Deputy Chief of Investigations Joseph Monaco said. "The first-floor apartment, which was the apartment that was affected by the fire, was occupied by several families, several members of a family. The third floor was also occupied by another family, but they were able to safely escape from the moment."

No other injuries were reported at the scene.

Alicia Caucoto and her family salvaged whatever they could from their basement apartment.

"I went in the backyard and I saw one of the kids jumping off the window, trying to climb out the window, while the flame was coming out from the A/C right there," Caucoto said.

Chief Monaco said seven members of the same family lived in the apartment, along with a guest. Of the eight people, two were children.

The building's owner told Eyewitness News he tried - months ago - to evict the tenants who lived in a small apartment not equipped to house a large group of people.

"Too many people in one apartment," building owner Samuel Konnamuttil said. "Eviction notice was sent legally six months ago was given. But they ignored, they never...'they never left?' they never left. That's the place the fire happened."

There was a minor gas leak that a crew was on the scene to fix, but officials say it was not related to the fire.

Anyone with information regarding this incident is encouraged to contact the Yonkers Police Detective Division at (914) 377-7724. All calls will remain confidential.