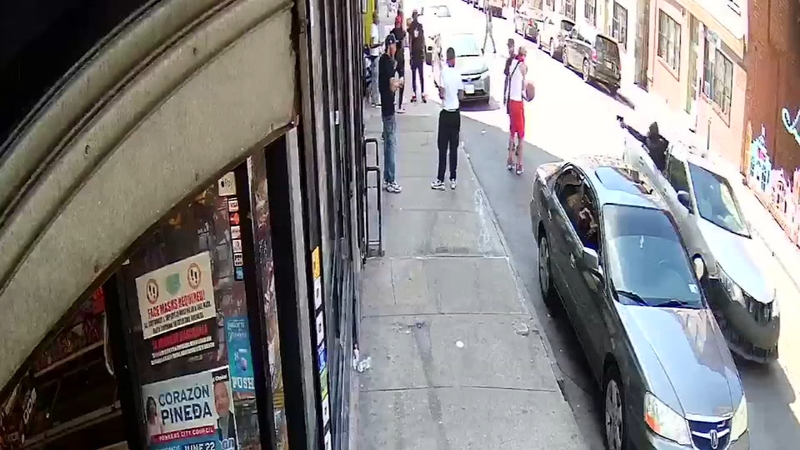 Police are still searching for the suspect in the braze drive-by shooting, which happened in broad daylight on Elm Street.

The video shows the gunman in the rear passenger seat holding his weapon out the window and shooting at the members of the group, who scramble for safety or fall to the ground.

Amazingly, with the shooting at such close range, none of the injuries are considered life threatening.

Still, the victims are in critical but stable condition.

The gunshots rang out around 4:15 p.m., and authorities believe the incident was gang related.

"Almost about 10 shots, boom, boom, boom," store owner Albert Fakhoury said. "So I closed the door, and I ran to the bathroom."

The latest outbreak of violence has Yonkers Mayor Mike Spano frustrated, in large part over the state bail reform law that he believes is a contributing factor.

"I'm not saying we don't need reform," he said. "We do. I'm a Democrat. I get it. But I am saying that you need to have a conversation take place with those on the front lines."

Less than two months ago and just a few blocks away, a 6-year-old was seriously injured after being caught in the crossfire of a gun battle between juveniles.

"Crazy, this is crazy," neighborhood resident Carlos Villanueva said. "Year ago, it used to be nice to live, but now, it's impossible."

Police say a weapon has been recovered, and arrests are expected.

Qualified families will receive a payment of up to $300 per month for each child under 6 and up to $250 per month for children between the ages of 6 and 17.