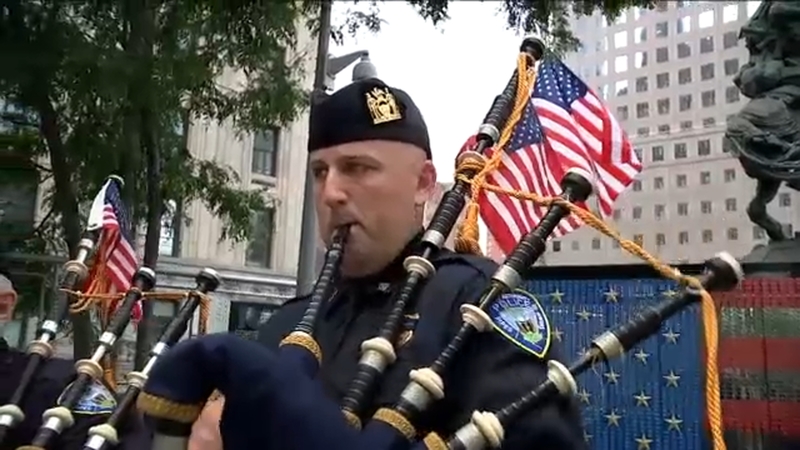 How Port Authority Pipes and Drums Band rebuilt after 9/11

NEW YORK CITY (WABC) -- Their practice begins in this vast space on the 53rd floor of 3 World Trade Center, where the band members overlook the footprints of the Twin Towers.

The site now represents 20 years of progress, but also 20 years of pain and a job that involved a lot more than you'd imagine.

Most of the band members are active Port Authority police officers, some of them are now retired, but all know how to play bagpipes or drums.

Brian Ahern, the last active member in the band, was working on September 11, 2001.

He was a rookie at the time, but the band lost three drummers in the attacks and suddenly there was a huge void.

That's when a supervisor approached him.

"He basically said, 'if you have a kilt, we need you to come to the first funeral tomorrow,'" Ahern said. "It was a blur. It got very busy at one point, where you would just go, and go, and go."

Over the last 20 years, there have been over 100 funerals for Port Authority employees, both police and civilian, including many who died from 9/11 related illnesses.

Lower Manhattan was being re-built while Ahern and others helped to re-build the band.

"Bagpipes and drums is not something that's easy to learn, it takes time," Ahern said.

After two decades, the band has doubled its number of active-duty members.

One of them is 33-year-old drummer Liam Huczko whose father, Steven, was one of the three killed on that day.

Liam was only 13 and the band played at his father's memorial service.

"it was comforting, it represented closure," Huczko said. "The first time I put on my kilt I realized I have very big shoes to fill."