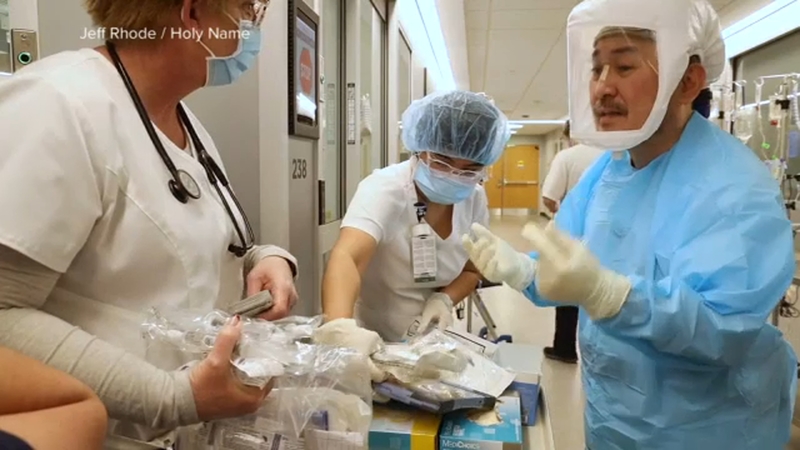 Fauci optimistic US turning the corner in omicron surge

NEW YORK (WABC) -- Dr. Anthony Fauci remains cautiously optimistic as the country appears to emerge from the omicron surge, with cases nationwide dropping by 10% in the last week.

The Tri-State area along with New England and the Upper Midwest have already seen cases hit their peak.

However, Dr. Fauci warns we've been surprised by this virus before and could encounter another variant.

He says he hopes the country can find a long-term strategy for dealing with future variants.

School mask rule to continue after New York state judge overturns mandate
A New York judge ruled Monday that the state's mask mandate can't be enforced, after it was reinstituted by Gov. Kathy Hochul over concerns about a winter surge of coronavirus cases.

However, the New York State Department of Education issued a statement that schools must continue to follow the mask rule until the case is resolved.

4 children have died from COVID-related complications in NJ since Christmas
State Health Commissioner Judy Persichilli says there have been four pediatric deaths since Christmas.

Twelve children have died in New Jersey since the pandemic began, eight of them younger than 5 and unable to be vaccinated.

NJ COVID cases down two-thirds in the last two weeks
New Jersey is among the list of states, including New York, that are seeing more positive signs in the fight again COVID and the omicron variant. In the last two weeks, the 7-day average for new daily cases in the Garden State has dropped by two-thirds.

"We're also optimistic about the rate of transmission, which has fallen below one and continues to drop, as well as the test positivity rate," Governor Phil Murphy said.

The governor also said that overall hospitalizations have been dropping significantly over the past week, but the numbers are still higher than anything we had seen with the two prior surges.

"We also remain very concerned about the ICU and ventilator numbers, which are coming down much more slowly," he said.

Military doctors, nurses arrive in NYC to help with omicron COVID surge
Federal help in the form of military doctors and nurses arrived at New York City Health + Hospitals Coney Island Monday to help with staffing shortages. Help also arrived at University Hospital in Newark over the weekend. It's all part of the Biden administration's effort to address the surge in hospitalizations due to omicron, and similar resources will be arriving at North Central Bronx Hospital on Friday. President Joe Biden announced plans earlier this month to send military medical teams to the New York and New Jersey area to help with the omicron surge.

Sarah Palin COVID-19 tests delay libel trial against NY Times
An unvaccinated Sarah Palin tested positive for COVID-19 Monday, forcing a postponement of the start of a trial in her libel lawsuit against The New York Times. The former Alaska governor's positive test was announced in court just as jury selection was set to begin at a federal courthouse in New York City. Palin claims the Times damaged her reputation with an opinion piece penned by its editorial board that falsely asserted her political rhetoric helped incite the 2011 shooting of then-Arizona U.S. Rep. Gabby Giffords. The newspaper has conceded the initial wording of the editorial was flawed, but not in an intentional or reckless way that made it libelous. U.S. District Judge Jed Rakoff said the trial can begin Feb. 3 if Palin, 57, has recovered by then.

Youngkin faces new lawsuit as Virginia mask order kicks in
Republican Virginia Gov. Glenn Youngkin is facing a new legal challenge over his executive action that aimed to let parents opt out of school mask mandates as his order takes effect. Youngkin issued the order as one of his first acts after being sworn in as governor. It kicks in Monday, but confusion has swirled over its implications. Some districts have interpreted the order as being at odds with a state law that deals with COVID-19 mitigation in schools and have opted to keep pre-existing mask mandates in place for students. It wasn't immediately clear Monday morning whether conflict would unfold at schools across the state over the conflicting guidance.

Stay home or work sick? Omicron poses a conundrum for workers without paid sick days
As the raging omicron variant of COVID-19 infects workers across the nation, millions of those whose jobs don't provide paid sick days are having to choose between their health and their paycheck. While many companies instituted more robust sick leave policies at the beginning of the pandemic, some of those have since been scaled back with the rollout of the vaccines, even though omicron has managed to evade the shots. Meanwhile, the current labor shortage is adding to the pressure of workers having to decide whether to show up to their job sick if they can't afford to stay home.

"It's a vicious cycle," said Daniel Schneider, professor of public policy at the Harvard Kennedy School of Government. "As staffing gets depleted because people are out sick, that means that those that are on the job have more to do and are even more reluctant to call in sick when they in turn get sick."