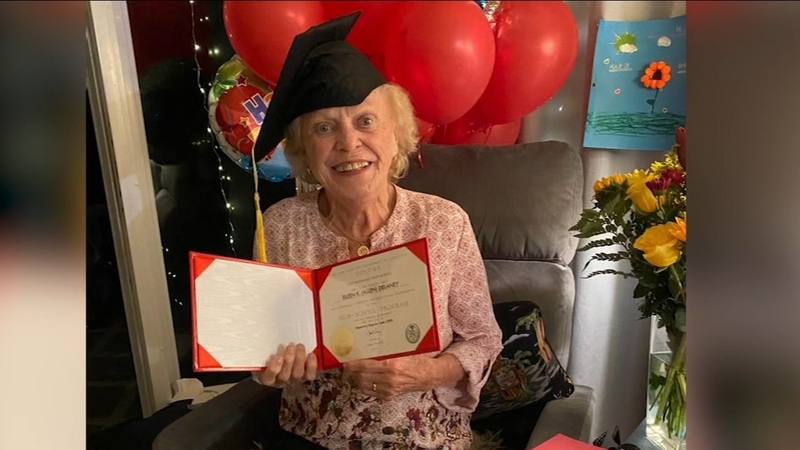 PORT RICHMOND, Staten Island (WABC) -- A 93-year-old from Staten Island received the gift of a lifetime when she was awarded a diploma from her high school 75 years later.

For Eileen Delaney's 93rd birthday, one of her nieces had an idea for a gift she never got to enjoy.

Delaney's niece contacted the alumni association of Port Richmond High School, and the principal awarded Delaney with a high school diploma from the class of 1945.

"I belonged to the alumni association all these years, I've always had letters from them, but I had no Idea, I have to be honest, I had absolutely no idea this was going to happen," Delaney said.

It would've happened back then, but Delaney left midway through her senior year.

Things were tough at home and her stepmother told her to get a full-time job.

"She insisted my senior year that I got to work, that if I was going to live in the house that I paid rent, and I had no choice," Delaney said.

At 18, she found a job that didn't require a diploma.

"I was very fortunate. I went to work for the New York Telephone Company," Delaney said.

She met and married her husband and raised a family, who generations later decided she deserved that diploma.

"For someone who has done so much for everybody else and never asked for anything in return I felt like this was the least that we could do for her," Delaney's granddaughter Delaney Elliot said.

Port Richmond High School is still right where it was 75 years ago.

The current principal said the decision to give Delaney her diploma was probably the easiest and happiest he's made all year, noting that the class of 2020 didn't get to be here for their milestone

It was a moment Delaney was able to share with family members even though gatherings are much more difficult now.

She says she never had any regrets because of how well it all turned out.

"I'm very lucky. I've had a good life. This was like the topping on the cake," Delaney said.