ABC 7 will broadcast the Hometown Heroes parade starting at 11:00 a.m. on Channel 7 and across all of our streaming platforms
WABC
By Anthony Johnson and Eyewitness News 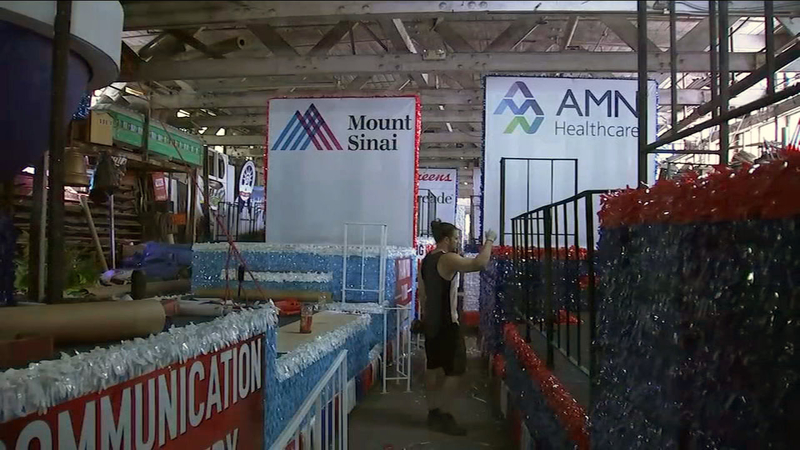 NEW YORK CITY (WABC) -- A parade float company in New Jersey that has been in operation since the 1940s is putting the finishing touches on those that will featured in the New York City parade honoring essential workers for their efforts during the COVID-19 pandemic.

The Hometown Heroes ticker tape parade begins at 11 a.m. Wednesday at Battery Park before marching up the Canyon of Heroes.

The 14 floats representing 260 different groups of essential workers, including those in healthcare, emergency response, public safety, community care, transportation, grocery stores, and many others.

ALSO READ | Hometown Heroes Parade NYC: What to know about the ticker-tape parade

"We're celebrating those people who help us overcome this," said Robert Devito, with Bond Parade Floats. "The people who put their lives on the line. They're genuinely real heroes."

The folks at Bond Parade Floats and Designs have a long been part of Canyon of Heroes salutes, with the last big one they worked on the parade that honored the U.S. Women's National Team following their World Cup win in 2019.

This time, we hail those who took us through more than a year of loss, uncertainty, and -- most of all -- kept us alive when so much was at stake.

"It's almost a victory parade of sorts for the entire country," Devito said. "Not just New York, but the country."

There was a genuine feeling of pride in the workshop on the day before the big parade.

ABC 7 will broadcast the parade starting at 11 a.m. on Channel 7 and across all of our streaming platforms, including abc7ny.com, our mobile app and our app for Fire TV, Roku, Apple TV and Amazon.

They'll work late into the night to make sure the floats are picture-perfect for the tribute to the men and women who will always have a special place in our collective hearts.

"They're our actual heroes," Devito said. "They save lives, and they risk theirs. It's fantastic, it's special, it's huge to be a part of this. It really is."