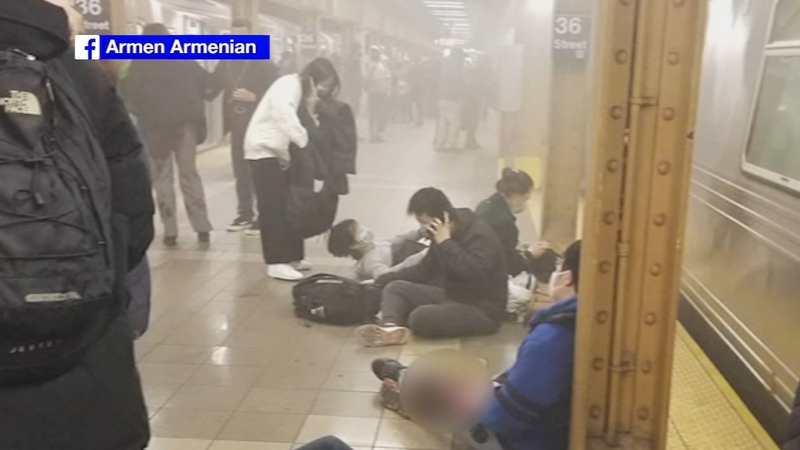 SUNSET PARK, Brooklyn (WABC) -- Nine people remain hospitalized Wednesday after the terrifying shooting aboard a subway train in Brooklyn, and even with the suspect now in custody, the victims face a long recovery both physically and mentally.

More than two dozen people were hurt in Tuesday's attack in Sunset Park, and while none of the injuries are considered life threatening, that doesn't ease the minds of New Yorkers wary of increasing violence.

"It was a really scary situation, almost like a horror movie of sorts," said Kenneth Foote, who was in the next car over on the Manhattan bound N train watching it fill with smoke. "And once we saw that gentleman banging on the door, fighting for his life, that's when I knew something was very, very wrong."

Then the train stopped in the tunnel -- and things got worse.

"That's when the gunshots happened," Foote said. "It was three or four quick pop, pop, pops right back, and everyone on my train immediately knew what it was. No one screamed or said anything, we were just pleading with the conductor to move this train."

Later, the platform and an approaching R train turned into a makeshift triage facility. Claire Tunkel sacrificed her jacket to stop a man's leg from bleeding out.

"I took off my jacket because that was the closest thing to wrap around his leg," she said. "I pulled out a grocery bag, shopping bag, and tried to tear that apart to help another person. Just...I don't know, at that moment I felt like if there was something I could do to help, that is what it was."

Officials said 21 of the 29 people injured were taken to NYU Langone, including most of the 10 gunshot victims, while Maimonides Hospital took in some of the youngest patients -- the youngest just 12 years old.

Luckily, that victim was not badly hurt and was able to go home.

Nine victims remain hospitalized, five of which are still at NYU Langone Hospital Brooklyn. They are all in stable condition.
EMBED More News Videos

Nine people remain hospitalized after the terrifying shooting aboard a subway train in Brooklyn, and the victims face a long recovery. Darla Miles has more on the victims.

Two gunshot wound patients, ages 16 and 18, are still at Maimonides Medical Center in Borough Park being treated, they are both in good condition as of Wednesday morning.

All of the young patients were heading to school on the train, including the 16-year-old boy who was shot in the leg and hand.

"It was a pretty devastating injury to the thumb, and it destroyed a lot of the bone, the joint, the tendon, the nerve," hand surgeon Jack Choueka said. "We were able to salvage the thumb. It's alive, and he'll need some more surgery."

"His mother does not speak English, she is Chinese," Hochul said. "She is there alone, and it was so sad to hear through a translator her anxiety. All she has is her son."

"All you see is smoke, black smoke bomb going off, and then people bum-rushing to the back," he said. "This pregnant woman was in front of me, I was trying to help her. I didn't know there were shots at first, I just thought it was a black smoke bomb. She said, 'I'm pregnant with a baby.' I hugged her, and then the bum-rush continued. I got pushed, and that's when I got shot in the back of my knee."

Candace McCowan speaks with a mom about the scene on the streets immediately after the incident.

Police announced Wednesday that the suspected gunman, 62-year-old Frank R. James, had been arrested after he was spotted wandering around the East Village.

The motive for the incident remains unclear.