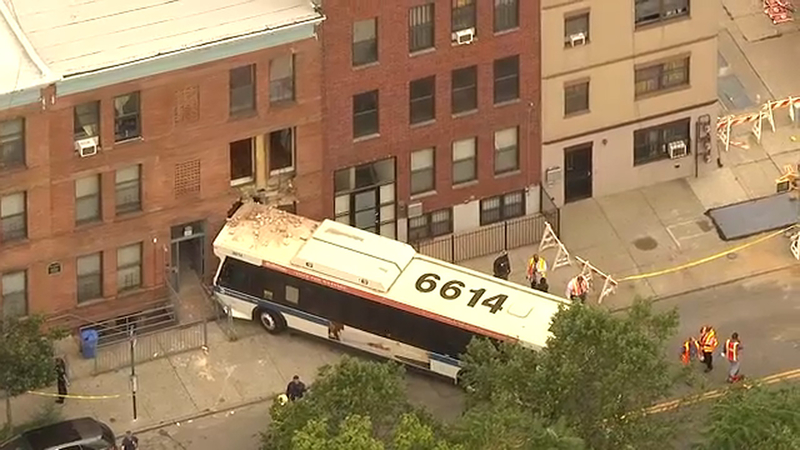 It happened around 10:15 a.m. at Ralph and St. Mark's avenues in Crown Heights.

There were no customers on board the B45 bus at the time, and authorities say the driver was making a right turn when he lost control and smashed into the building. He was apparently trying to avoid some construction.

"He hit the mailbox first and then hit the fire hydrant," witness Dalia Jamison said. "And when he hit the hydrant, that, like, sent him into shock, and he turned. He clipped the front of the truck and went into the building."

Jose Fuentes was standing on the corner watching the bus turn from St. Marks Avenue on to Ralph Avenue.

"He had to widen his turn because the truck was blocking his view," he said. "So when he widened his turn, he hit the mailbox. He had to double swerve. He didn't want to hit the people who were standing there."

Junior Nelson, the building superintendent, says a tenant was on the couch in front of the windows watching a movie.

The driver suffered trauma and was rushed to Kings County Hospital.

Five other people who were inside the building or in the vicinity suffered minor injures and were treated at the scene.

The cause of the crash is under investigation, and inspectors from the Department of Buildings also responded to check the integrity of the building.

Engineers determined the building is not structurally compromised, but they issued vacate orders for the two apartments nearest the site of the crash.

Displaced residents are being offered assistance by the American Red Cross.

Officials are requiring the owner to shore the building at the crash site, put up a sidewalk shed outside the building, and seal the opening caused by the crash.

They will continue to monitor the site until the owner complies with those instructions.