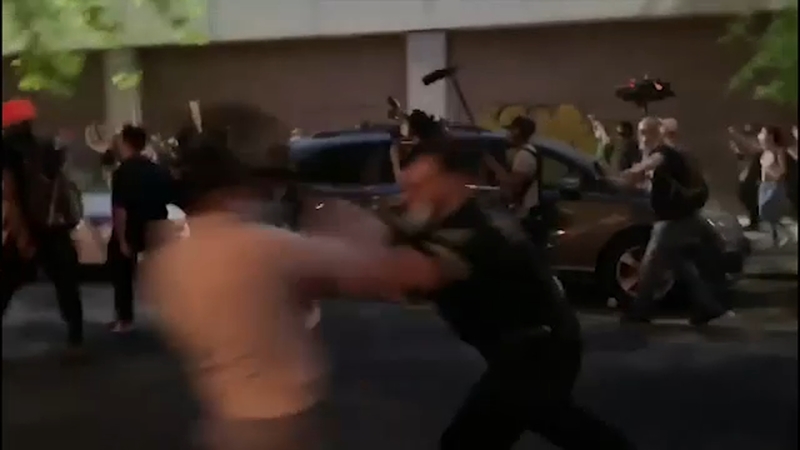 Charges expected against NYPD officer who pushed protester to ground

NEW YORK (WABC) -- An NYPD officer caught on camera pushing a woman to the ground during a protest over the death of George Floyd was charged with assault and other offenses Tuesday.

Officer Vincent D'Andraia, who surrendered directly to court for arraignment, was caught on video shoving Dounya Zayer near the Barclays Center on May 29.

"I fully support the long-held American tradition of non-violent protest," Gonzalez said. "As district attorney, I cannot tolerate the use of excessive force against anyone exercising this Constitutionally guaranteed right. This is especially true of those who are sworn to protect us and uphold the law. I am deeply troubled by this unnecessary assault. We will now seek to hold this defendant accountable."

According to the investigation, the 28-year-old D'Andraia was walking with a contingent of police officers assigned to monitor a large crowd of demonstrators protesting racial injustice.

Zayer, 20, was in the street when the officer told her to move. As she asked why, he allegedly smacked her cell phone out of her hand and violently shoved her to the ground.

She can be seen rolling on the street and into a curb. Meanwhile, D'Andraia and fellow officers can be seen walking away.

According to the criminal complaint, D'Andraia called the victim "a stupid (expletive) (expletive)" before the incident.

Zayer suffered head and back pain, a seizure, and a concussion, and she was hospitalized

She called D'Andraia a coward and suggested the assault would only deepen mistrust of law enforcement.

"I was protesting for a reason," Zayer said in a video tweeted from her hospital bed. The officer, she added, "should have had the self restraint to not hurt the people he's supposed to be protecting."

D'Andraia, assigned to the 73rd Precinct, had already been suspended without pay. PBA president Pat Lynch says the officer isn't getting due process.

"I don't like what I saw, 'He should lose his badge and shield,' but then we are going to have an investigation," he said. "They have it backwards."

The officer was released without bail following his arraignment, and the judge approved an order of protection for the victim, barring him from contacting her.

He is due back in court Oct. 15. His supervisor, Commander Craig Edelmen, who was with him at the time of the incident, has been transferred.

The victim's attorney said she is disappointed the officer was charged with a misdemeanor and not a felony, given the severity of the injures.

"Officer D'Andraia's arrest is not justice, and accountability remains to be seen," attorney Tahanie Aboushi said in a statement. "Dounya was assaulted for the very reason she was protesting - police brutality. The NYPD has been allowed to engaged in this type of conduct with impunity for too long. It is one of the reasons I am running for Manhattan District attorney. As civil rights attorney, I have litigated excessive force cases for over a decade and if not for the video this would be business as usual for the NYPD. No badge, privilege or special interest is above the law. It is imperative that the District Attorney remains independent from the NYPD and transparent throughout this matter. It is also concerning that no action has been taken against Commander Craig Edelmen who sanctioned D'Andraia's misconduct by failing to intervene before, during and after his assault of Dounya. He has simply been reassigned which puts another community at risk and sends the message that supervisors who encourage this behavior are exempt from accountability."

"Once again, Mayor de Blasio and the NYPD brass are sacrificing cops to save their own skin," he said. "They created the failed strategy for managing these demonstrations. They sent police officers out to do the job with no support and no clear plan. They should be the ones facing this mob-rule justice. We will say it again: New York City police officers have been abandoned by our leadership. We are utterly alone in our efforts to protect our city."

The Detectives' Endowment Association also released a message for all members of its union, telling them to "have the least amount of interaction with the public that is necessary to fulfill your official duties."

U.S. Rep. Hakeem Jeffries called for D'Andraia's firing and praised the reassignment of his commanding officer, who witnessed the shoving and did not intervene.

"Violent police officers who brutalize civilians must be held accountable for their behavior," Jeffries said in a statement. "It's my hope this is the beginning of transformational change in the largest police department in the nation."

A separate incident, also on May 29, in which a police officer was seen on video pulling down a man's face mask and then spraying the man in the face with pepper spray is also under investigation by the Brooklyn District Attorney's Office. That officer has also been suspended without pay.