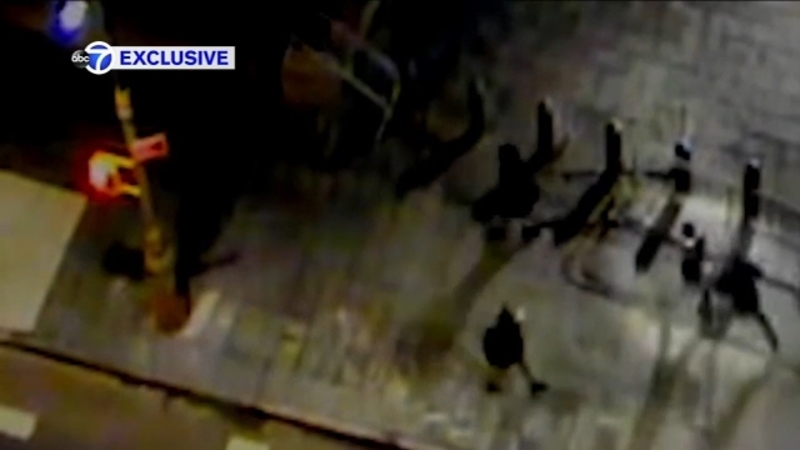 CHINATOWN, Manhattan (WABC) -- A rally was held outside the Manhattan District Attorney's Office Monday to demand the man charged in the stabbing of an Asian man in Chinatown be prosecuted as a hate crime.

"We are fed up, and we are pissed off," community advocate Don Lee said at the rally. "Enough is enough."

Salman Muflihi, 23, is currently charged with second-degree attempted murder, first- and second-degree assault, and third-degree criminal possession of a weapon -- even though the NYPD had changed its initial recommendation and called for hate crime charges.

He told detectives he stabbed the victim "because he didn't like the way he looked at him" and also said to an officer, "I stabbed that guy. If he dies, he dies. I don't give a f--k."

The victim, who was stabbed in the back, remains in the hospital in critical condition after losing one of his kidneys and his adrenal gland, and suffering damage to his liver.

"Our communities are living in fear and anger and frustration," City Council candidate Richard Lee said. "Frustration because we see these incidents happening to our friends, our neighbors, our families, yet no hate crime charges are being brought forth."

Hate crime charges were not initially expected, but then the NYPD revealed that one of Muflihi's previous arrests was for allegedly punching another Asian man.

That led police to believe the the attack may have been racially motivated, but the Manhattan District Attorney's Office declined to prosecute the stabbing as a hate crime.

Investigators have nothing so far to indicate the defendant ever saw the victim's face prior to the attack, because he was wearing a hat and a mask, a law enforcement official told ABC News.

Now, the League of Asian Americans of New York joined with several Asian American candidates for New York City Council to demand the DA prosecute the Chinatown stabbing as a hate crime.

They say if the suspect admitted the victim made eye contact, then at least he saw his eyes and could tell he was Asian.

"He admitted that he did not like the way he looked at him," City Council candidate Susan Lee said. "So there is no way why the DA would drop the charges."

The District Attorney's Office responded to a request for comment with the following statement:

"The defendant's statement that he 'didn't like the way (the victim) looked at him' does not establish a hate crime, when the evidence to date shows that he ran up to the victim from behind and may have never actually seen his face," it read. "As we do in every case, we are continuing to investigate and may bring additional charges if warranted."