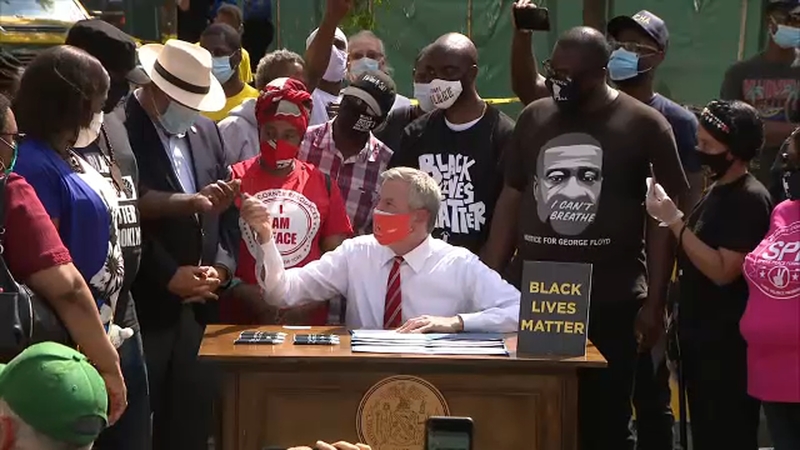 De Blasio signed the NYPD Accountability Package in a ceremony on Morris Ave. in the Bronx as people painted a Black Lives Matter mural on the pavement behind him.

"The Black Lives Matter movement has been at the forefront of change in New York City and across our nation. I'm proud to sign these sweeping reforms into law and honor the work they've done," de Blasio said. "I'm confident we can make these reforms work and continue strengthening the bond between police officers and our communities."

A release from the mayor's office says the package is a comprehensive set of police reforms aimed at increasing transparency within the NYPD and strengthening trust between the police department and the community it serves.

The sweeping reforms will ban the use of chokeholds across the NYPD, protect the right of citizens to record police activity, require NYPD transparency on the use of surveillance technologies, establish an online NYPD disciplinary matrix, and ensure all NYPD officers have their shield number and rank designations visible at all times while on the job.

The signing comes the same day the NYPD's top officer, Chief of Department Terry Monahan, was among four officers injured during a protest at the "Defund the Police" encampment near City Hall.

Chief of Department Terry Monahan was among the four officers injured during protests at City Hall Wednesday in Lower Manhattan -- this all happening at the same time a "Stop the Violence" march went across the Brooklyn Bridge where dozens were arrested.

Police Commissioner Dermot Shea, who has reportedly called the package of bills "insane," responded on Twitter.

Three of our officers were brutally attacked by protestors today.

These are the conditions your officers have to operate in every day while they continue to protect your neighborhoods.

Such assaults are ALWAYS unacceptable, and should outrage us all. https://t.co/eNr3ptCyOE

The New York City Council passed the set of bills in June as protests following the death of George Floyd while in police custody in Minnesota enveloped the city.

The New York City Council on Thursday voted to pass a sweeping set of police reforms that include a ban on chokeholds and greater transparency when it comes to NYPD surveillance.

At Wednesday's ceremony, de Blasio noted that in just a few days the city would mark six years since the death of Eric Garner, who died after he was placed an apparent chokehold by NYPD officers on Staten Island.

"It never should have happened, and it should never, ever happen again in this city. And there are people who die, who are good people and we never know their names. And then there are those who die, who should not have died, but they did not live in vain. They did not die in vain, because change is happening. And we remember Eric Garner, and he - his very example compels us to further change. And today will be a step in that direction," de Blasio said.
Report a correction or typo
Related topics:
new york cityblack lives matternypdgeorge floydnyc councilsurveillancepolice officereric garnermayor bill de blasiopolice brutalitypolice
Copyright © 2022 WABC-TV. All Rights Reserved.
TOP STORIES
14-year-old ID'd as person of interest in death of Kyahara Tay
Kidnapped CA teen found in NY thanks to quick-thinking detective
1 killed, several injured in multi-vehicle crash in New Jersey
Dave Chappelle attacker now charged in December attempted murder case
AccuWeather: Warm west
NYC Health Department investigating possible monkeypox case in NYC
911 dispatcher who took Buffalo shooting call put on leave
Show More
529 Plans - How they can help you save/pay for college
NJ swim school teaching children how to survive a water emergency
Rihanna and A$AP Rocky welcome their first child
2nd racist incident at sports event between Nyack, Pearl River
NY high court to determine if Bronx Zoo elephant is a person
More TOP STORIES News