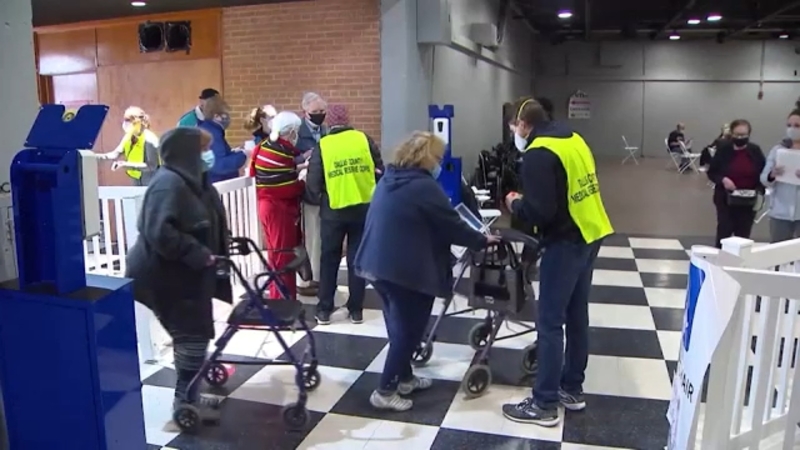 Biden announced the surge in deliveries to states Tuesday, along with the news that the federal government is purchasing an additional 100 million doses each of the two approved coronavirus vaccines. With existing purchases, the White House expects to be able to deliver enough of the two-dose regimens to states to vaccinate 300 million people.

Overall, the Biden administration plans to make about 10.1 million first and second doses available next week. That figure is up from this week's allotment of 8.6 million.

The Biden administration is boosting purchases of coronavirus vaccines to deliver enough to protect 300 million Americans by the end of the summer, as it surges deliveries to states for the next three weeks following complaints of shortages and inconsistent supplies.

On top of that, the administration is committing to purchasing 200 million additional doses by summer, which coupled with its current allotment, would be enough to vaccinate the entire country.

However, during one TV appearance Tuesday evening, Gov. Andrew Cuomo said while it is good news, "it's not enough" and right now, "my state is effectively out of vaccine."

"We are not going to have enough vaccine for months unless the new Biden administration can figure out how to ramp it up, this is a production issue," Cuomo said on MSNBC.

Cuomo said the government is distributing the vaccine based on population, but he said perhaps the vaccine should be distributed based on states that are going through their allotment faster.

His comments come as the governors had asked to increase the supply and give states more advance notice about future vaccine allotments.
Still, he said it's great news.

"You have a new federal government and a totally different approach," Cuomo said during another TV appearance on CNN. "They came in after six days they said we want to partner and you have a competent, professional federal government that tells the truth. Look at what President Biden said. Literally he said to solve this problem we need the vaccine, that's the weapon that wins the war, we understand that. And he's going to order it."

He said the allocation plan will hopefully put an end to the week-to-week chaos.

Stacey Sager reports both the positivity rate and the rate of hospitalization is down across New York, and Governor Andrew Cuomo is expected to ease some restrictions.

The supply question underpins nearly everything else, especially the rollout of vaccine eligibility. Murphy has put it this way: The state has more than 200 distribution sites, including six mass vaccination sites; it has determined millions of residents are eligible, but "all we are missing are vaccine doses."

It's been less than a week since Biden's inauguration, but Murphy says he's already spoken with the president, his advisers and Dr. Anthony Fauci about the response to the pandemic. What sticks out to Murphy as novel is access to officials and what he called "straight" information.

Stopping short of accusing the previous administration of lying, Murphy pointed out that the vaccine shipments that reached New Jersey were lower than what the state was told to expect.

Anthony Johnson has more on New Jersey's vaccination efforts and what the governor is doing to get more supply.