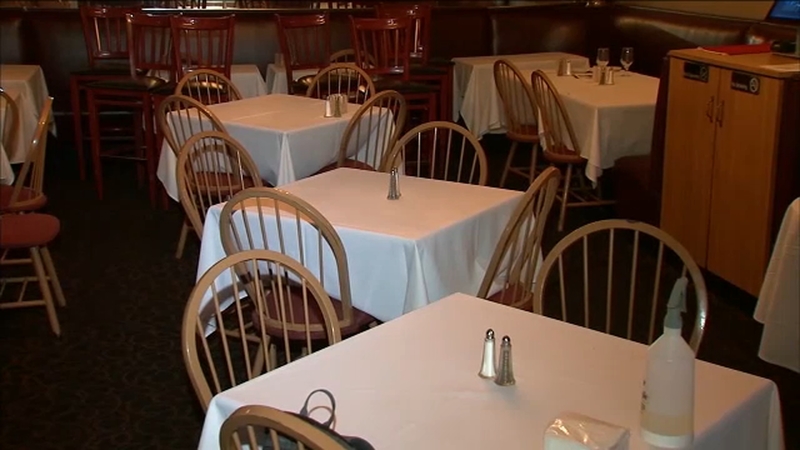 NEW YORK CITY (WABC) -- Gov. Andrew Cuomo says he won't let New York City reopen its restaurants for indoor dining until the city comes up with a plan to make sure they are following regulations to reduce the spread of the coronavirus.

"My opinion is restaurants should open. The question is how?" he said on Thursday.

Cuomo is facing pressure from the restaurant industry, which has seen business plummet amid the pandemic and hundreds of workers seeking unemployment assistance.

Some New York City lawmakers are pushing for indoor dining in the city, and some restaurant owners are now filing a class action lawsuit.

The suit is seeking $2 billion in damages, alleging the state is violating the constitutional rights of the owners of more than 150,000 New York City restaurants, many of which have already closed permanently.

One restaurant in Queens argues customers can walk blocks away into Nassau County if they want to eat indoors.

Il Bacco on Northern Boulevard say it is unfair that indoor dining is illegal in Little Neck, but legal just a few blocks east in Great Neck, on Long Island.

In fact, New York City is the only city in the state that still does not allow some form of indoor dining, and New Jersey is going to allow indoor dining at 25% capacity starting Friday.

Among the concerns cited: the small footprint many of these city restaurants occupy, and fears that authorities won't be able to enforce capacity limits

It's a moment that many restaurants and diners in the area have been waiting for, including Leo's, a restaurant in Hoboken.
EMBED More News Videos

Naveen Dhaliwal has a look at restaurants in New Jersey preparing for indoor dining that's set to begin Friday.

On Wednesday, de Blasio suggested an announcement could come this month.

"I think it's our responsibility to give them as clear an answer in the month of September as possible, of where we are going," the mayor said Wednesday. "If there can be a timeline, if there can be a set of standards for reopening, we need to decide that in the next few weeks and announce it, whether it is good news or bad news."

A decision on the resumption of indoor dining in NYC should come sometime in September, Mayor Bill de Blasio says.

"It's time to allow indoor dining in New York City with reduced capacity and clear guidance to ensure social distancing and safety," he said. "This is crucial for restaurant owners, who have been particularly hard hit by the pandemic and the resulting drop in tourism. Summer is winding down, and they need to begin planning for the colder months. Of course, we will continue to monitor the City's COVID-19 rates, just as we must for all of our businesses. We know that the restaurant industry employs many New Yorkers, including many immigrants. Its health and well-being are imperative to our city. The rest of the state has been allowed to reopen their restaurants for indoor dining, and New Jersey is allowing indoor dining come Friday. Now is the time to allow it in New York City. Our restaurants and our City's economy can't wait."

Cuomo said he would reach out to Johnson to discuss what needs to be done to reopen indoor dining. Cuomo suggested New York City could deploy police officers to ensure compliance with safety guidelines such as mask-wearing and capacity limits.

"If New York City can say this many police can be put on a task force to monitor the compliance, that's something we can discuss. I'm going to say to the restaurant association, tell me how we are going to enforce it and how we are going to monitor compliance because the facts on how we will monitor bars are damning," Cuomo said. "You have heard me on the past month saying there is a lax compliance... All restaurants can open, but they have to have this, this, this. But the plan is only as good as your ability to enforce. Right now, we have no ability to enforce it."

De Blasio said Thursday that the city will provide guidance to restaurants this month and that he is in "constant dialogue" with the state. The mayor offered a note of caution: "The NYPD has a lot on its hands and they're dealing with so many challenges and fighting back the challenges we face."

"We're happy that Governor Cuomo wants to reopen indoor dining in New York City, since restaurants around the rest of the state have been operating indoors safely for the past two months, but his suggestion that compliance is the hold up is not supported by the inspection data from his agencies which indicates nearly 100% compliance in the City," Andrew Rigie, executive director of the NYC Hospitality Alliance said in a statement. "Restaurants in New York City are well-regulated by the NYC Department of Health, who conduct thousands of inspections a year and are certainly not shy about it. Any further hold up continues to jeopardize tens of thousands of small businesses and hundreds of thousands of jobs in New York."

Meantime, the owner of Melba's in Harlem says it is just going to get worse, especially for black-owned businesses.

"When America catches a cold, black America catches the flu," she told Eyewitness News. "There's so many disparities within our black communities.... If the mayor does not open restaurants, even if it's at a lower percentage, 50%, 30%, I'm really afraid that the homeless rate is going to rise."

A decision on whether indoor dining will be permitted during the pandemic will happen this month, Mayor Bill de Blasio said Wednesday morning. De Blasio said indoor bars and nightc

The city has pushed to expand outdoor dining, though Cuomo increased restrictions on bars following reports of crowds violating social distancing rules. The restaurants, in their lawsuit over the ban on New York City indoor dining, claim the restriction lacks scientific basis and question why it is allowed so close to New York City. But public health experts have warned that dining is risky in enclosed spaces with groups of people talking loudly, sharing food and drinking alcohol.

States including Louisiana and Maryland have linked new cases to bars and restaurants. New York is now reporting a sharp decline in hospitalizations and fatalities since a peak of over 18,000 COVID-19 patients and well over 700 deaths a day in mid-April.

Cuomo has praised New Yorkers for keeping infection rates down, contrary to expectations after the state began reopening in mid-May. New York City recorded about 9,000 positive COVID-19 tests in August, down from over 11,700 in June, according to state Department of Health data. Still, the virus is not vanquished. Over 9,000 COVID-19 tests were positive across New York in the last two weeks of August as some upstate communities weather upticks at colleges and elsewhere. And New York City has continued to represent about half of the state's positive cases.

The governor announced the city's malls and casinos across the state can reopen with restrictions starting Sunday but said neither can allow indoor dining in New York City. Casinos won't allow table games and both must install enhanced filtration systems.