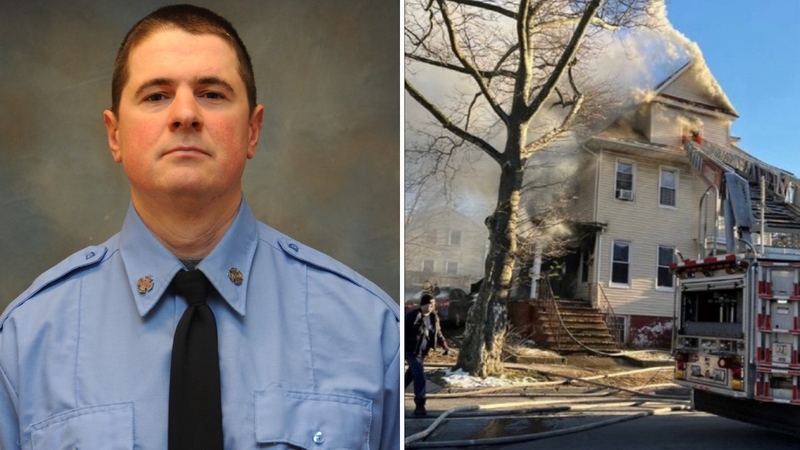 BAY SHORE, Suffolk County (WABC) -- A funeral was held Wednesday for a fallen New York City firefighter who died in the line of duty.

The funeral for Jesse Gerhard was held at St. Patrick's Roman Catholic Church in Bay Shore.

Thousands of firefighters and police officers from across NYC and Long Island gathered to bid a final farewell to the fallen firefighter.

The son, brother and uncle was remembered as a gentle giant with a deep love and passion for serving others. He had dreamed of becoming a firefighter since he was a child.

"Even when we had bad days, he would say, how can I complain? I have the greatest job in the world," Firefighter Michael Ormiston said. "This is a gut punch for me, for our firehouse, and for the department."

He leaves behind his parents, brother and sister-in-law who spoke on behalf of his older brother.

"How have 33 years of being your brother flown by in the blink of an eye, but these past few days that you've been gone feel like an eternity," said Kristi Gerhard.

The 33-year-old died last Wednesday when he collapsed at his firehouse just one day after battling a house fire in Far Rockaway, Queens.

"The hearts of FDNY Firefighters, and all New Yorkers, break for the family of Firefighter Jesse Gerhard as they mourn his loss," said Andrew Ansbro, President of the FDNY-Uniformed Firefighters Association. "Today, we lay to rest a hero who gave his life for the safety of this City and this Department. His sacrifice will be eternally remembered by all those who knew him, served this Department alongside him, and all those who were kept safe by his actions. May he rest in peace."

Last week, the FDNY hung bunting at the firehouse, Ladder 134 on Central Avenue.

"There is sorrow felt throughout the entirety of the FDNY community today, as we mourn the loss of Firefighter Jesse Gerhard," said Lt. James McCarthy, President, Uniformed Fire Officers Association. "Firefighter Gerhard laid down his life for this City and its eight million residents. The members of our organization will continue to honor him and his legacy, who gave the ultimate sacrifice so that others may live. The Uniformed Fire Officers Association and its members will forever honor him in word and in action as a hero."

Gerhard joined the FDNY as an Emergency Medical Technician in July 2014 and was first assigned to Station 10 in Manhattan and later served at Station 47 in Far Rockaway.

He entered the Fire Academy in December 2017, and after graduating in April 2018, was first assigned as a Firefighter to Engine Company 264 in Far Rockaway.

In March 2020, he transferred to Ladder Company 134, located in the same firehouse as Engine Company 264 in Far Rockaway.

He was honored for bravery once in his career, the FDNY said.

Firefighter Gerhard is the 1,156th member of the FDNY to die in the line of duty. He was a registered organ donor which means even in death, he can still help save up to 75 lives.

The last member of the department to die in the line of duty was Lieutenant Joseph Maiello, who died on December 26, 2021.