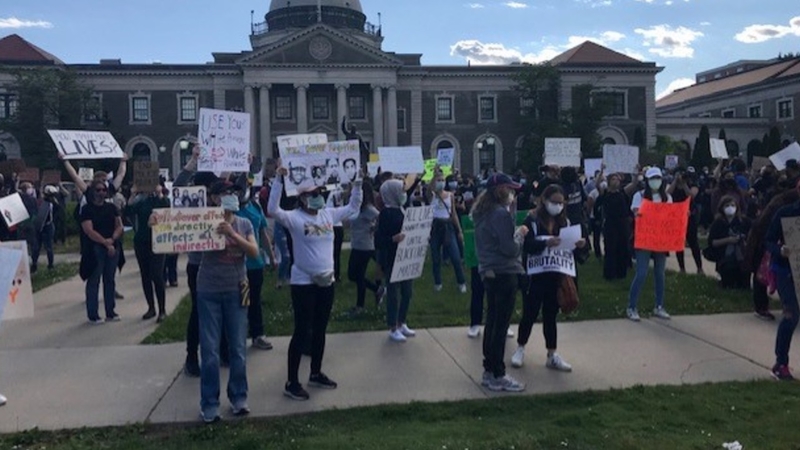 COMMACK, Long Island (WABC) -- Several protests were held on Long Island Monday in response to the death of George Floyd.

Hundreds of people gathered peacefully along Jericho Turnpike in Commack chanting "Black lives matter" and "I can't breathe." Many drivers honked in approval as they went by.

"The mass incarceration system and other systems of oppression have been killing innocent black folks for generations and it's time up to speak up and not use silence as an excuse to remain complacent," said Ryan Young of Commack.

Inspector Mike Romagnoli with the Suffolk Police Department said protestors have been gathering at the location since Saturday.

"It's been very peaceful. They've been very respectful and compliant with the police," he said.

Protestors also came together at Route 347 and Route 112 in Port Jefferson Station Monday afternoon as well as on Higbie Lane in West Islip.

"It shouldn't have come to a point where we all have to stand out here in a pandemic across America to get the message out that all lives matter, black lives matter," said one protestor who didn't want to be identified.

A large rally was also held on the steps of the Nassau County Executive Building in Mineola Monday evening. The event was organized by the Young Progressives of Nassau County and featured speakers and prayer by local spiritual leaders.

Another protest was scheduled for 7 p.m. Monday beginning at the Trader Joe's parking lot in Commack.

Protestors at all the locations wore masks because they were not able to social distance. An organizer at the Commack protest reminded people to wear their masks.

New York Governor Andrew Cuomo said he is concerned that the protests in which people do not wear masks or social distance may reignite the coronavirus.

"We spent all this time closed down, locked down, masks, socially distanced. Then you turn on the TV and you see mass gatherings that could potentially be infecting hundreds and hundreds of people, after everything that we have done," Cuomo said.