All activity came to a halt at one of the busiest terminals on December 13, after a man reportedly wandered on the taxiway near the American Airlines terminal.

Port Authority officials say they are still trying to find out who the man was and how he got by security, all while an angry Congressman is calling for a review of the breach.

The intruder, reportedly a Middle Eastern male, was first spotted inside the airport perimeter near a taxiway. The police radio dispatch report of the incident stated, "Report of a male walking across the taxiway toward Terminal 8."

Terminal 8 is one of the busiest at JFK, and it is the New York base for American Airlines. At one point, a cargo worker approached the man near one of the ramps to ask if he had an airport security badge.

The suspect warned him, using profanity, not to say anything, then continued walking toward the terminal. Port Authority police were called, but according to the incident report, it took 10 minutes and 24 seconds for the first patrol to arrive.

The intruder slipped away.

Police sources say part of the reason for the delay is there is no direct radio link between NYPD 911 dispatch and Port Authority Police at JFK . When the 911 call of an intruder came in to NYPD dispatch, they then had to make a landline call to Port Authority Police. who then dispatched their own patrol. Valuable time was lost.

"What can happen in 10 minutes? That's a lifetime," Congressman Gregory Meeks said. "Ten minutes, and the guy gets away."

Sources say this recent breach occurred when the intruder jumped over one of the many places surrounding the airport where the fencing has no sensor alerts.

"We can not allow on the perimeter of the airport to be any weak links," Meeks said. "In this day and age we live in, we have zero room for error."

However, once the man got onto one of the taxiways, it is clear the Port Authority took it very seriously.

At one point, the tower advised all aircraft to be held in place at Terminal 8, stopping all air traffic for more than 45 minutes.

"They had to feel insecure," Meeks said. "You have an individual running around on tarmac, don't know who it is or what he has or where he is."

The Port Authority released a statement to Eyewitness News hen the intrusion was reported, writing "PAPD responded, swept the area using canines and deemed the area safe." They say detectives are reviewing closed-circuit television and interviewing potential witnesses, but it is unlikely the intruder will ever be found or his motive determined.

The incident is another reminder that under-staffing and slow responses may one day have serious consequences.

"I want a review of all of the procedures," Meeks said. "This should never ever happen."

Meeks, whose district includes JFK, says he has spoken to the secretary of Homeland Security about the intruder and the technical holes in the airport's perimeter fencing. His other concern is that the intruder could have been testing the system.

"We don't know, and because we don't know who, anything is possible," he said. "Anything. And I hope police find out who he is, and where he is." 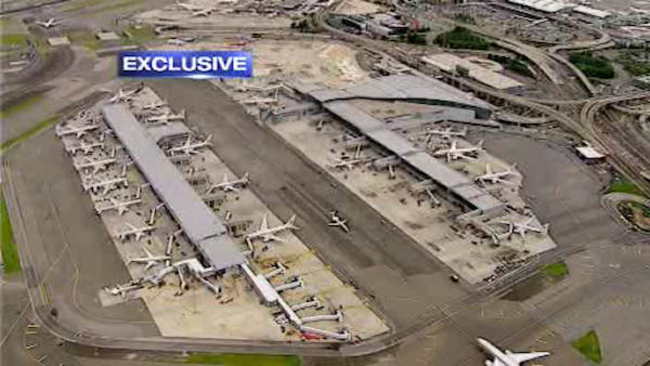