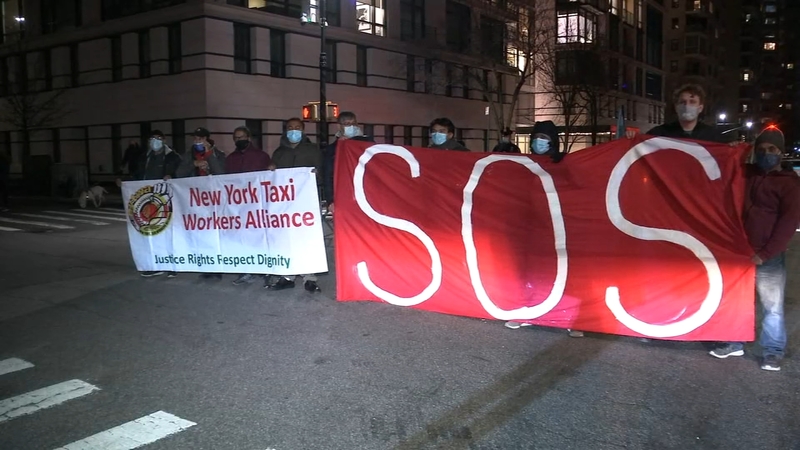 A protest was held outside Gracie Mansion Tuesday afternoon over the plan, which uses federal stimulus money to offer loans of up to $20,000 to restructure medallion debt and up to $9,000 in debt payment support.

The city is calling on lenders to "reset the terms of their loan," saying "restructuring those loans could be a lifeline."

"Medallion owners have been hit hard by this pandemic," de Blasio said. "They deserve all the support we can give them as ridership recovers. This program creates a pathway to solvency and supports the yellow medallion taxi industry's important role in building a recovery for all of us."

New York is expanding its vaccine eligibility to include individuals age 60 and above starting at 8 a.m. Wednesday.

However, medallion owners like Dorothy LeConte says the mayor is not being honest.

"The mayor is not honest. He should feel ashamed of himself," LeConte said.

LeConte has been driving a cab for 30 years. Business has been so bad during COVID, her 6-figure medallion now sits on a shelf.

She has taken to delivering packages and food, but it's not enough to repay the loans on her unused medallion.

Between ride sharing services and the COVID shut down, business has dropped to unsustainable levels these drivers.

The $65 million Taxi Medallion Owner-Driver Relief Fund will include:
--0% interest loans of up to $20,000 to use as a down payment to assist in restructuring medallion debt
--Up to $9,000 in no-interest loans to make as many as six monthly loan payments of $1,500

"I have spoken with many medallion owners, and I hear the pain in their voices," TLC Chair Aloysee Heredia Jarmoszuk said. "They worry about being able to provide for their families, sometimes having to choose between making a loan payment and putting food on the table. This relief fund will give crucial help to an industry that was overleveraged and suffered severe loss of business during COVID-19. As the City's economy recovers, we want to give medallion owners the support they need to get vehicles back on the streets and handle increased passenger demand."

"Mayor de Blasio's response to our debt crisis does absolutely nothing for drivers," she said. "It's a cash bailout for lenders while drivers are left to drown in debt, foreclosure, and bankruptcy. This is not debt forgiveness. This is not a collective solution to our crisis. This is not justice. The mayor's plan is a disgraceful betrayal from a city that already has blood on its hands."

She says the mayor's plan falls short of the desires of the gigantic bailout sought by the New York Taxi Workers Alliance, which would cut every driver's debt to $125,000.

That proposal is supported by politicians like Attorney General Letitia James, who pulled off an $800 million suit against the city last month, indicating massive debt-restructuring was the better course of action.

"We've given the mayor ample opportunity to respond to our proposal," Desai said. "Instead, he put forward a plan that costs the city more than our proposal while doing absolutely nothing for the drivers. If the mayor wants war, he can have war. There is no peace without justice for drivers."

Drivers promise to protest outside Gracie Mansion every day and night until their voices are heard and they get a sizeable forgiveness package.

"This isn't going to be nearly enough," she said. "Average owner-driver debt was at $500,000 prior to the pandemic. We need real debt forgiveness and a robust plan so no more taxi drivers face bankruptcy and lose their homes, their retirement savings, or worse."