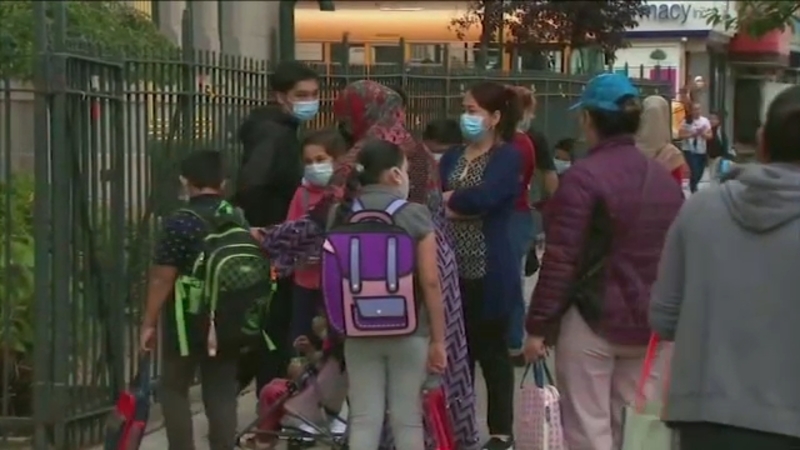 Why there are COVID testing concerns in NYC schools

NEW YORK CITY (WABC) -- As New York City efforts its crackdown on clusters, there are encouraging numbers for schools.

The positivity rate is just 0.2%, but there are concerns about how many are being tested.

That's only 20% of students who they're allowed to be tested currently.

They're still pushing for consent from parents making it clear any student whom they do not have permission to test would have to move to remote learning.

The state has mandated weekly for schools in the yellow zones, but Mayor Bill de Blasio says the infection rates are leveling out, so he hopes the limits on many communities can soon be lifted.
EMBED More News Videos

Mayor Bill de Blasio says New York City is doing better than it was a week ago, but test results in the city's cluster zones are still alarmingly high.

"There is a chance we get out of these restrictions as early as the latter part of next week," de Blasio said. "That's my goal. And based on the numbers I've seen, we are still in striking range of that."

On Staten Island, Assembly member Mike Reilly, who represents South Shore of Staten Island, was informed by several parents that their kids received a COVID-19 test, without parental consent which is required.

"Earlier this afternoon, I shared preliminary information pertaining to several incidents where New York City public school students were tested for #COVID-19 by the NYC Department of Education despite not having consent from the student's parent or guardian," Reilly said on a Facebook post. "I am aware that the Office of the Special Commissioner of Investigation is looking into the matter, but that doesn't mean we can't demand greater accountability going forward. In my letter to Department of Education Chancellor Richard Carranza, I ask that parents receive a better explanation about what happened in these particular cases, as well as a better understanding of the exact procedure that the Department of Education's clinical staff follows when selecting and addressing students. I know many of you are frustrated and worried about this and so many other issues that are affecting the New York City public school system this year. As the parents of two public school students, my wife and I are in the same boat as many of you. Chancellor Carranza is also a parent. I hope that, after he reads this letter, he will begin to see these issues through the lens of a public school parent - until then, nothing will get better."

The New York City Department of Education responded to the matter.

"This should have never happened and we are adjusting our protocols to ensure it does not happen again," said Nathaniel Styer, of the NYCDOE. "For example, we are taking additional steps to make sure staff are using the most up-to-date consent lists during random testing, which is a critical part of keeping in-person learning safe and healthy for students and staff."

Churches in the hot zones also denied their appeal once again as the restrictions continue.

The judge made it clear in his decision that he felt the restrictions from the state were "guided by science and not a desire to target religious practice."

The Diocese of Brooklyn was seeking a temporary restraining order to stop Governor Andrew Cuomo's executive order that limits religious gatherings to just ten people in the red zone and 25 in the orange zone.

The executive order started earlier this month and currently last until early November as they try to get the spike in coronavirus cases under control here.

And now the Diocese says they will consider their appellate options.

They say with the restrictions still be in place, they've decided to keep churches in the red zone closed, since the rules are hard to implement.

As New York works to curb hot spots of COVID-19, some religious groups continue to stand against the state's latest restrictions.