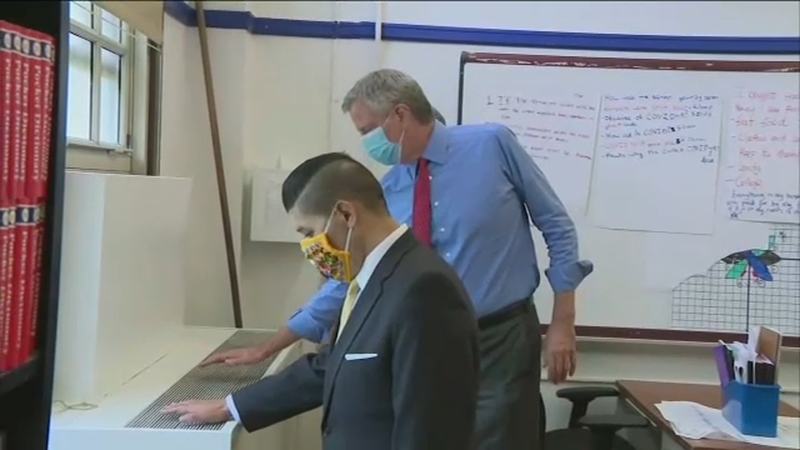 NEW YORK CITY (WABC) -- There are rising concerns over whether or not schools are safe to open in just a couple of weeks in New York City.

Mayor Bill de Blasio announced a new team to test the air, but that's not the only safety concern principals are worried about before classes begin.

While the mayor and schools chancellor consider plans that assume children are safer outside than inside the schools, principals in Bronx District 7 point to some of the safety hazards outside.

Just outside the Alfred E. Smith High School and PS 1 on East 151st Street in Melrose, that a mother of three, Priscilla Vasquez, was shot and killed.

The Principals of District 7 have written a letter to the mayor and DOE saying that the area may not be safe for outdoor learning due to an increase in violence.

"Another item of concern is the proposal of holding classes in nearby parks and closed streets. Our District has been in the grips of a wave of gun violence that is dangerously affecting and can further exacerbate the safety conditions for all members in our Learning Community."

Some of those concerns were repeated, along with others, at a virtual news conference Wednesday morning hosted by SOMOS US, a Latino-led network of physicians treating 800,000 largely-Latino patients.

So far, there is no response from the mayor or DOE on the principals' concerns.

On Tuesday, the mayor and chancellor turned their attention to ventilation in schools and talked about dispatching teams of ventilation experts and professional licensed engineers to see how those indoor environments measure up.

"We are working very closely with UFT, in fact we have a building safety working group that has already been walking buildings and classrooms that have been identified by the teachers' union that have been identified as problematic, so we are taking a unified approach and we are going in and making sure that those classrooms are safe," Schools Chancellor Richard Carranza said.

The results of those inspections would be posted online for parents.

RELATED: This is what Dr. Anthony Fauci is saying about reopening schools

The city's current reopening plan calls for a mix of in-person and remote learning, with students taking turns in classrooms when they return in the fall. But more than a quarter of students have decided to go with the all-remote option instead.